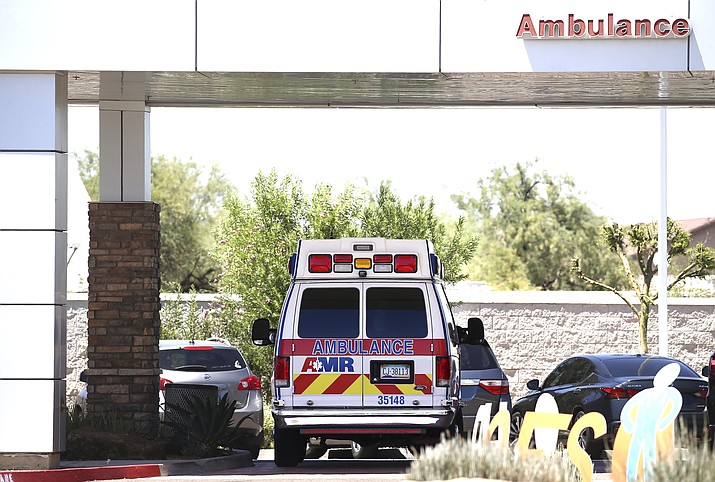 An ambulance is parked at Arizona General Hospital June 10, in Laveen, Arizona, as Arizona hospitals that are expected to be able to treat new cases of coronavirus without going into crisis mode were above 80 percent capacity June 16, a milestone that should trigger an automatic stop to elective surgeries at affected hospitals. The state is dealing with a surge in virus cases and hospitalizations that experts say is likely tied to Gov. Doug Ducey's ending of statewide closure orders in mid-May. (AP Photo/Ross D. Franklin)

The state Department of Health Services reported 2,392 new cases and 25 additional deaths. Hospital intensive care units were hovering around 80 percent capacity with 1,307 people with the virus as of June 15.

Arizona has seen 39,097 cases and 1,219 deaths. It's unclear how many of the new cases are due to expanded testing.

Gov. Doug Ducey has said hospitals would possibly forego elective surgeries if capacity was 80 percent or greater to save space for a COVID-19 surge. So far, though, there have been no indications that elective surgeries will be delayed.

The St. Vincent de Paul Society, in a joint effort with CVS Health, has started offering rapid, free virus testing for uninsured people by appointment at the nonprofit's clinic in Phoenix. The goal is to allow people from low-income and other disproportionately affected communities to be tested, with results provided on the spot.

The number of new cases has leaped over the past two weeks. Ducey's stay-at-home order expired more than a month ago.

Arizona has drawn national attention as one of several emerging virus hot spots. Some experts have criticized Ducey and his administration for not doing more to stop the spread such as enforcing face masks and increasing contact tracing.

Nearly 700 Arizona doctors and other medical providers have signed a letter urging Ducey to mandate the use of face masks in public for anyone older than 2. The group states there is "sufficient, clear, scientific evidence" that wearing masks lessens the spread of the virus, ABC15.com reported. Patrick Ptak, the governor's spokesman, said June 16 that COVID-19 remains the highest priority and the state recommended that everyone wear a face covering when out in public. The state will continue to remind people to follow public health guidelines, he said.