Is your house defensible? Protecting your home during Arizona's wildfire season 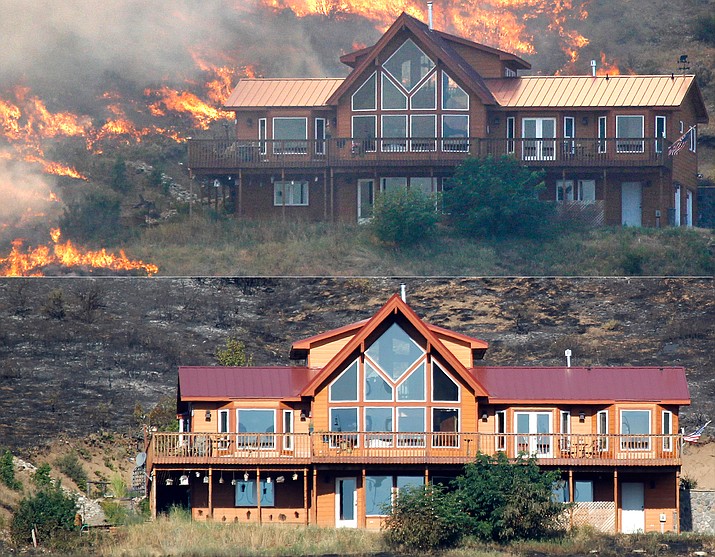 A house (top) on a hillside above Bettas Road near Cle Elum, Washington, is surrounded by flames Aug. 14, 2012. A spokesman for the Washington state Department of Natural Resources said the house survived the fire (below) because of the defensible space around the structure with the placement of the driveway and the lack of trees and brush up against the house preventing flames from reaching it. (AP Photo/Elaine Thompson)

Wildfire season is upon us in Arizona. As temperatures rise and vegetation becomes drier, Arizona is trying to get a handle on several wildfires that have erupted in the last few weeks.

Fueled by strong winds, the North Rim’s Mangum Fire jumped from 80 acres June 12 to nearly 30,000 acres June 15, causing the evacuation of Jacob Lake and Grand Canyon’s North Rim communities, while several other wildfires are burning near Tucson and Phoenix. 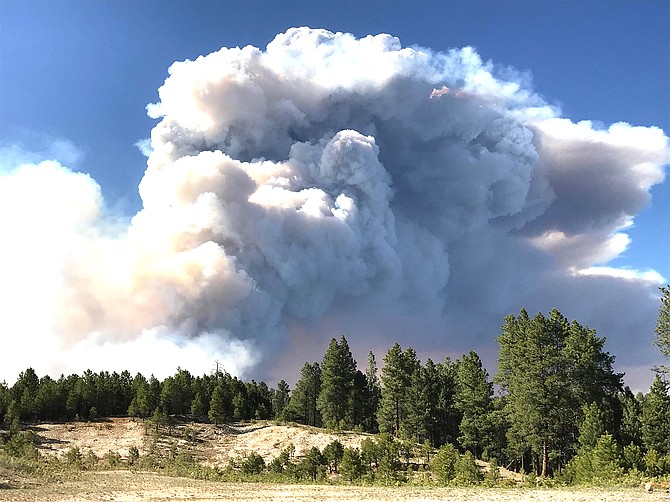 Heightened fire activity is expected across much of the west this summer because of increasing drought conditions, early loss of mountain snowpack, overall hot and dry conditions and expected lightning that should persist through August, according to the National Interagency Fire Center (NIFC).

The intensity of wildfire season is difficult to predict, but the National Weather Service Climate Prediction Center is predicting a hotter and drier than average summer across the west.

Eight of the United State’s worst wildfire seasons have been seen in the last 12 years because of drought and decades of fire suppression, and forest managers work each year to prepare for hotter and more intense fires.

The Four-Forest Restoration Initiative is one mechanism the US Forest Service has been using to make ponderosa pine forests less fire prone in Arizona through prescribed fire, mechanical thinning and other methods, and local fire agencies are encouraging home owners to take similar measures.

Using this time to plan

Many Williams residents either live in ponderosa pine forests, pinyon-juniper habitat or a combination wildland-urban interface. Preparation for wildfires can seem overwhelming and some even believe futile, but experts have found that taking even just a few precautionary measures can make a difference.

“The more work a homeowner puts in, the better off it is,” said Williams Volunteer Fire Department Chief Kevin Schulte. “There is a better chance of survivability.” 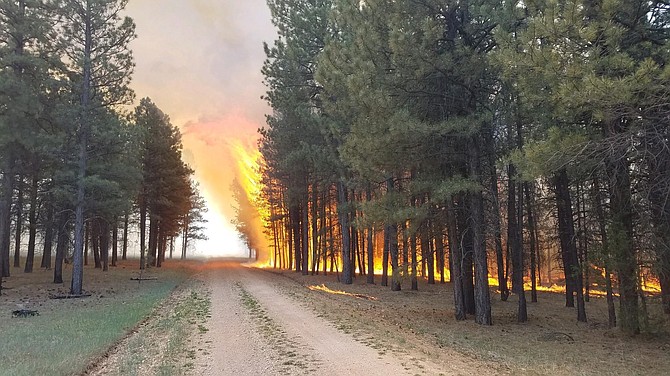 Fire activity has accelerated on the north end of the Mangum Fire because of strong winds June 14. Embers from wildland fires start most home fires. (Photo/USFS)

Schulte said homeowners in Williams can do a number of things to protect their homes and make firefighters’ jobs easier.

“The number one cause of homes burning is the embers flying,” Schulte said.

Embers can travel for miles ahead of a wildfire front, and if they get inside a home through a chimney, vents or an open window, or if they land on dry vegetation, dead trees or combustible materials near the home, they can ignite a new fire which can then consume that home and start a chain of fires within a neighborhood or community, Schulte said.

Residents can help protect their homes through home and yard upkeep and by creating defensible space.

“The homeowner can’t just depend on firefighters, they have to take care of their property as well,” he said.

Schulte said he realized how even simple measures can help owners protect their homes during his experience working the Tinder Fire near East Clear Creek.

“There were some homes that practiced Firewise whose homes survived,” he said. “Other homes didn’t.”

Schulte said he remembers one home who had followed defensible measures but their home still burned, which he believes was because of patio furniture left outside.

“The home had cushions on the furniture on their back porch,” he said. “They did everything right with landscape, but when they evacuated they didn’t remove the furniture.”

Defensible space involves managing vegetation and other combustible materials surrounding a home or other structure to create a border that can help slow or stop the spread of wildfire. Combustible natural fuels, flammable home building materials and drought can combine to make a property high risk.

Zone 1 extends about 30 feet from buildings, structures or decks. This includes removing all dead plants, grass and weeds in that area, and removing dead leaves and pine needles from the yard, roof and rain gutters. 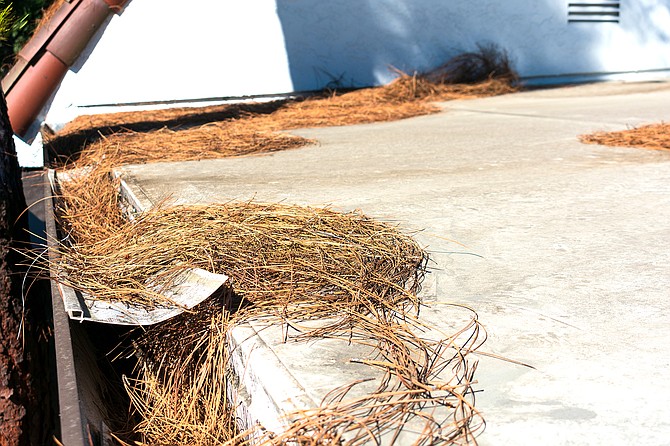 Cleaning pine needles, leaves and branches from roofs, porches and decks reduces the chance of an ember catching a house on fire. (Stock photo)

Branches shouldn’t hang over the roof or touch the home - dead branches should be at least 10 feet away from a chimney or vent. Trees should be trimmed regularly with branches kept to a minimum of 10 feet from other trees. 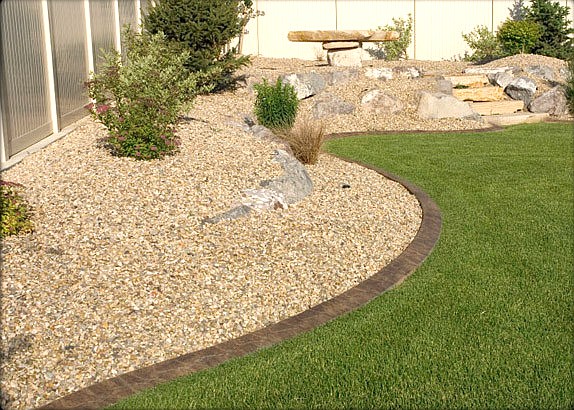 Flammable plants and shrubs should be pruned or removed from near windows.

Separation should be made between trees, shrubs and items that could catch fire, such as patio furniture, wood piles, swing sets, etc.

“Usually it’s the 0-5 feet of the house is the most imminent danger,” Schulte said. “Cleaning pine needles off the roof and gutters and filling spaces embers could blow into can help.”

Zone 2 extends 100 feet out from buildings, structures or decks.

Neighborhoods should consider working with land managers to clear dense vegetation and thin trees. Ladder fuel removal should be considered. The goals of this zone are to improve the health of the wildlands and help slow an approaching wildfire. It also is an aesthetic transition between the more heavily modified Zone 2 and the unmodified surroundings

By managing vegetation and other combustibles, residents can mitigate home fires by minimizing direct contact with fire, reducing radiative heating and lowering the probability of ignitions from embers.

Other ways to be prepared

In addition to defensible space, homeowners can also reduce fire risk through construction materials and cleaning.

The Institute for Business & Home Safety reports that up to 90 percent of homes and other buildings damaged or destroyed by wildfire were ignited by embers and not the main front of a fire.

Through independent tests, the group found that homes built with fire resistant materials such as fiber cement board siding and ceramic or steel roofing were less prone to burn. 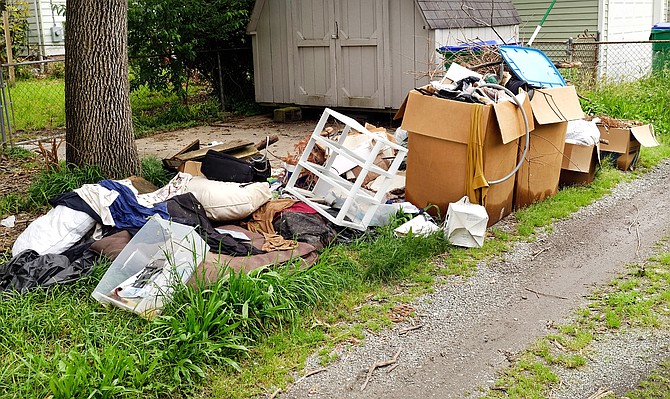 Residents can also help protect their homes by removing excess toys, patio furniture and other materials from around the home.

Schulte said homeowners should also sign up for text alerts from Coconino County and the city of Williams.

“If there is a rapid evacuation, we don’t have the resources to go door to door and notify everyone,” he said.

Coconino County follows the nationwide Ready, Set, Go! program that educates residents about proactive measures to take before an emergency and actions to follow when communities are threatened.

The three steps encourage Arizonans to get READY by preparing now for what threatens their community, be SET by maintaining awareness of significant danger and to GO, evacuate immediately when the danger is current and life-threatening.

This includes assembling an emergency supply kit ready to go that includes important personal items, such as prescriptions, medications, a first aid kit and extra clothing.

“When we hit GO, that is when we evacuate,” Schulte said.

What can I do for my home?