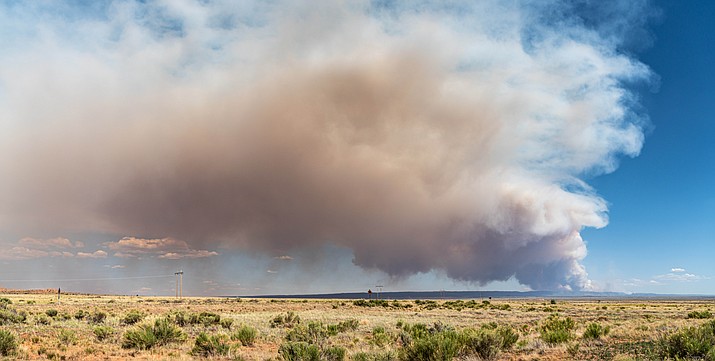 JACOB LAKE, Ariz. – Around 4:40 p.m. Coconino County Sheriff’s Office along with U.S. Forest Service personnel began evacuating the Jacob Lake area after Forest Service officials deemed the Mangum Fire had reached a point where it became a threat to residents and visitor safety.

Areas evacuated include the Jacob Lake Inn and campgrounds to the north and south of the Inn at the Junction of Highway 89A and Highway 67. The Magnum fire started June 8 on the North Kaibab Plateau and has grown to approximately 2,238 acres. It is currently 2 percent contained.

The cause of the fire remains under investigation. High southwest winds and low relative humidity have increased fire activity over the last several days and is predicted to continue through the weekend. The fire is being suppressed utilizing a full suppression strategy, using tactics that minimize impact to important values at risk.

Smoke from the Mangum Fire is visible from both the North and South Rims of the park. Visitors may see increased smoke or haze filling the canyon.

The Coconino and Kaibab national forests will go into Stage 2 fire restrictions across both forests effective June 13. The forest are implementing Stage 2 restrictions because of increasing fire danger and the need to prevent human-caused wildfires during potentially dangerous fire conditions.

Under Stage 2 fire restrictions open fires including campfires, charcoal, or wood fueled flames are prohibited. Gasoline or propane stoves remain allowed if operated in an area clear of vegetation. Smoking is prohibited, except within an enclosed vehicle or building, a developed recreation site, or while stopped in an area at least three feet in diameter that is barren or cleared of all flammable material.

On June 13, Kaibab National Forest will also temporarily close the Bill Williams Mountain watershed just southwest of the city of Williams because of the area's susceptibility to uncharacteristically severe wildfire and the post-wildfire flooding that would result.

More information about fire restrictions across the state are available at https://firerestrictions.us/az/.