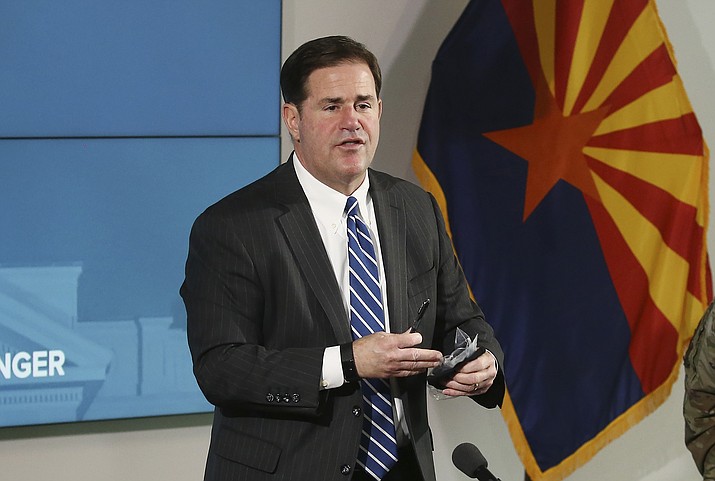 PHOENIX (AP) — Arizona Gov. Doug Ducey dismissed mounting concerns Thursday about the state's alarming rise in coronavirus cases, and focused on hospitals' capacity to care for patients rather than slowing the spread of the virus.

"That's what's most important when there is a rise in cases," Ducey told reporters. "Because a rise in cases could result in a rise of severe illness that requires hospitalization. I want every Arizonan to be able to have the medical care and comfort and resources necessary and today we are able to provide that."

Arizona is one of several states that has seen a surge in new COVID-19 cases after stay-at-home orders were lifted last month. Ducey said the increase was not unexpected partly because of a wider availability of testing. But some experts disagree, citing a lack of a face mask requirement or contact tracing in the state. Some are calling for tighter restrictions.

The state will be making more of an effort to do public health education, Ducey said. But that would not require enforcing face masks. The Republican governor himself has been criticized for not wearing a mask in public and in meetings.

"Wearing a mask when you can't social distance is good. I'm going to wear a mask when I'm in those situations," said Ducey, who had a mask in his pocket but didn't wear it.

Arizona has been seeing more than 1,000 new coronavirus cases per day. Those figures prompted Democratic Rep. Ruben Gallego to send a letter to Ducey on Wednesday, chastising the governor and demanding to know how he would address the "growing public health emergency our state is facing."

When Ducey ended his business closure and stay-at-home orders in mid-May, there were fewer than 400 new cases a day. Public health experts note that the percent of positive tests has nearly doubled in the past few weeks.

On Thursday, the state reported 1,412 new cases and 32 new deaths. With those numbers, Arizona has 31,264 confirmed cases of COVID-19 and seen 1,127 people die from the virus since March.

On Thursday, the governor's office distributed a statement from the state's hospitals that said they were prepared for any surge in cases and had adaquate capacity. The state's hospitals were above 80% full on Wednesday, not counting the ability to add 50% more beds if needed to care for virus patients.

Ducey said the state has been preparing over the last three months to handle a surge in cases but "the fact that the worst case scenario is not here today is positive news."

The governor said he was not planning to revise a portion of his executive order that requires hospitals to stop elective surgeries if they reach 80% capacity.

"My executive order is going to continue to stand," he said. "If we were to see hospital capacity that was in the alarm rate, elective surgeries would stop."

Health Services Director Dr. Cara Christ said she would work with hospitals to see if they needed to stop surgeries. None have told the Associated Press they were near the 80% level, despite the state's own numbers showing they were cumulatively at 84% on Wednesday.

Maricopa County health officials made similar pronouncements at a news briefing Wednesday, and said all employees are now required to use masks when they are within 6 feet (2 meters) of coworkers.

Ducey has praised the large majority of the state's residents who have followed social distancing guidelines but has declined to criticize large gatherings at nightclubs. His executive orders block cities from taking actions to stop activities that may spread the virus. And he is not requiring the public to take steps like wearing masks.

For most people, the new coronavirus causes mild or moderate symptoms, such as fever and cough that clear up in two to three weeks. For some — especially older adults and people with existing health problems — it can cause more severe illness, including pneumonia, and death.