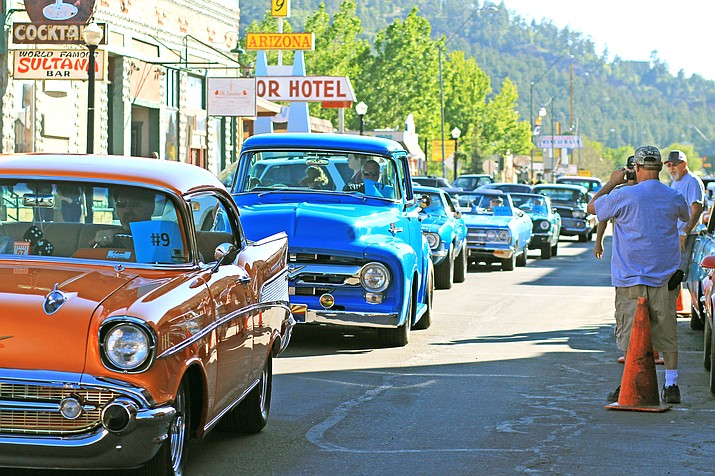 WILLIAMS, Ariz. — When people think Road Trip, the first highway that comes to mind is invariably Route 66, and for good reason. Since it was established as a semi-continental route from Chicago to Los Angeles in 1926, Route 66 quickly became one of the most important highways in America, serving everyone from migrant families escaping the Dust Bowl in the 1930’s to hippies heading west in the 1960’s.

The nostalgia for vintage cars and open-air driving is alive and well in Williams, and the 5th annual Historic Route 66 Car Show is a perfect place to soak it up.

After two months of uncertainty because of the coronavirus pandemic, the car show is a green light.

Hosted by American Legion Cordova Post 13, hundreds of vintage cars are expected to cruise town and line the street June 12-13 in downtown Williams.

“We’re shooting for 300 (entries),” Bassett said. “We’ll probably get close to that or right at it.”

Bassett said as the governor’s executive orders expired and businesses began to open up, organizers decided to move forward with the car show.

Now with less than a week before the show, organizers are pushing to finalize plans.

“We’ve got a lot of hustling to do,” Bassett said. “If I’m not mistaken this will be the first big social event for the city of Williams this year.”

Organizers said the entries are up to 230 with one week to go.

“We probably get 25 percent of people that show up with their old cars just to show up and cruise around and don’t enter the car show itself,” Bassett said.

This year’s show will have several new additions, including a slow drag June 12 starting at 11 a.m. at American Legion Cordova Post 13, 425 West Grant Avenue in Williams.

Also new this year is the addition of a DJ who will relay event information and winners at radio station FM 88.1

“In our opinion, it’s going to be so large it’s going to have to go from end to end (of town) so we want everybody to be in-tune to what’s going on,” said organizer Diana Croteau. “They can tune into their car radio or businesses.”

Judging for the car show takes place June 13 from 10 a.m.-2 p.m. with an awards ceremony at 4 p.m. at the World Famous Sultana Bar in Williams. Categories include Best Rat Rod, Best of Ford, Best of GM, Best Paint, Best Mopar, Traveled the Farthest, Best of Show and Best Street Rod and People’s Choice.

There will be live music Friday and Saturday night with Tension & Dissonance, and Jimmy and the Entertainers and

“The American Legion welcomes the whole community to participate in this,” Bassett said. “We’ve discovered that this is really a dynamite event for the community. Businesses in town really love it and we look forward to working with them on this. It’s a good event — a community oriented event for sure.”