Elyse Moreno steps in as new director at Canyon daycare 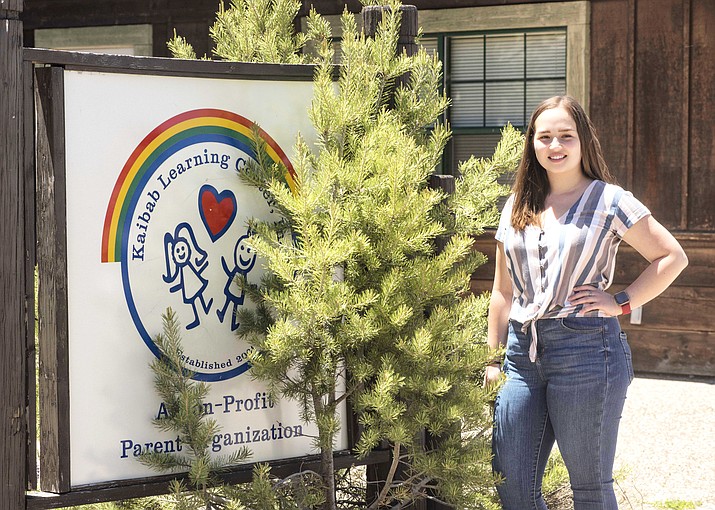 GRAND CANYON, Ariz. — Perseverance, hard work, faith and a passion for children were stepping-stones that led Elyse Moreno to her new position as director of Kaibab Learning Center (KLC), a local daycare located on the South Rim of Grand Canyon National Park.

Born and raised at Grand Canyon Village, Moreno left in 2015 to attend Northern Arizona University (NAU). She graduated in 2019 with a degree in social work.

During her time at NAU, Moreno as chapter president for Silver Wings, a national co-ed, professional organization dedicated to creating proactive, knowledgeable and effective civic leaders.

“Silver Wings really pushes you outside of your comfort zone,” Moreno said. “I learned how to interact with people and present myself well.”

During the summers, Moreno intermittently returned to work at the Grand Canyon at the day care.

“I worked as summer camp director for three seasons,” Moreno said. “Upon graduation, I applied for assistant director and was hired.”

Little did Moreno know that just months later she would be considered for the directorial position.

“I was amazed and so thankful to be chosen,” she said. “Coming back to the Grand Canyon to serve this community in this capacity is my way of giving back to a community that supported me throughout my life.”

During her time at the Canyon, Moreno said she has grown personally and learned how to conduct herself as a professional. KLC Chairman of the Board, Bridget Rabon said Moreno was the right candidate for the job.

“Elyse has a passion for the students (and) the populace here, as well as helping parents further their goals,” she said. She is very calm, fantastic at multi-tasking, tech-savvy and in a short time has taken the center to a whole new level.”

Rabon pointed out that Moreno was interim director of KLC for several months during a very difficult time as the national park and local community faced uncertainty because of the coronavirus.

“During the Covid-19 crisis, Elyse had to close the center and she had to interface with the community during the closure. She did it seamlessly so it was an easy choice who our candidate for director would be,” Rabon said. “We have all the confidence in the world in her.”

During the pandemic, Moreno coordinated a graduation for students via Zoom.

“It was a very personal touch and added a new element to the leadership,” Rabon said.

Moreno said she had help coordinating and organizing the graduation and wanted to thank community members.

“The virtual preschool graduation party would not have been possible without the help from Grand Canyon School PreK teacher April Krombeem,” Moreno said. “It was a joint project and I’m very thankful to her.”

Previous KLC director Michelle Pahl, said Moreno has always been a joy to work with and is confident in her abilities.

“She was dependable and had such a special relationship with the kiddos,” she said.

KLC infant teacher and parent, Camie Riese said Moreno has surpassed expectations with her humble attitude and the care and attention she brings to the job.

“During the Covid-19 closure, we saw the rock that Elyse truly was. She kept communication open and kept the graduation tradition open by arranging a photo session and planning a virtual graduation party,” Riese said.

Currently, at the top of Moreno’s list, is preparing KLC and the staff for reopening.

“With the Covid-19 changes and transition, my goal is to maintain the safety of the children, staff and families,” she said.

Moreno stated the center is in the process of preparing and has submitted a re-opening plan.

“Once we have approval, we will set a date to reopen,” she said.

KLC is a non-profit organization founded in 2001 to provide quality daycare, preschool, and after school programs within a Montessori-inspired learning environment for children birth to age 12. It is the only licensed daycare facility in 50 miles and serves the families of Grand Canyon and neighboring communities, including Tusayan and Valle. Currently KLC has 15 teachers and one volunteer.