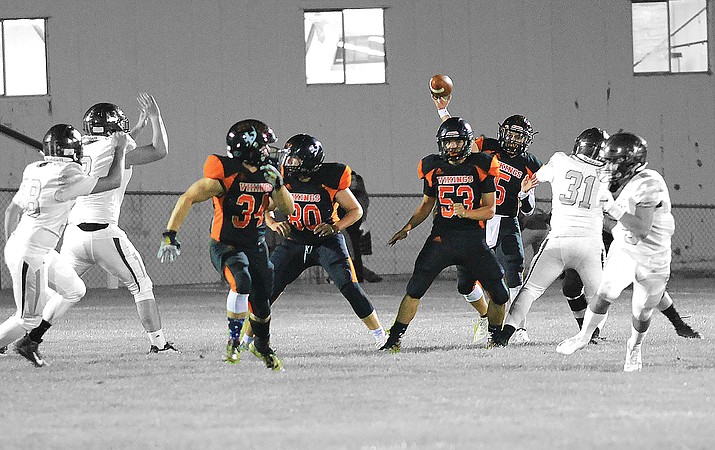 With much uncertainty, the Williams Vikings are taking the first steps toward the 2020 football season. (Wendy Howell/WGCN)

WILLIAMS, Ariz. — As Gov. Doug Ducey announced Aug. 17 the start of the new year for Arizona schools, Williams High School has taken the first steps toward gearing up for the 2020 football season.

At this time, the Arizona Interscholastic Association (AIA) has stated that fall sports can officially begin Aug. 17.

School administrators at Williams Unified School District have decided to begin online learning Aug. 10 and have plans for in-person learning to begin Aug. 17.

Some districts, mostly on reservations, have canceled fall sports due to the pandemic and going with virtual learning. Other schools are gearing up to salvage a fall season for the athletes.

For Vikings football, Williams High School will host a team camp Aug. 3-6 from 4 – 7 p.m. to begin rebuilding its state championship team amid the coronavirus pandemic.

“This will give us an early start, because we didn’t have spring ball and we didn’t have our passing league,” said Jeff Brownlee, head coach for the Vikings.

Brownlee said the goal is to get the players back on the field in a safe manner.

He said the school will be following AIA and CDC guidelines for a safe return to the sport.

The AIA has stated an 8-10 game schedule can be achieved by starting competition the week of Sept. 7, with possible modifications to 1A football. The current playoff structure may have to be adjusted after input from member schools.

The organization sent out a survey to schools July 27 regarding reopening plans. The survey is to provide the AIA valuable information as the association prepares to start fall sports based on the resources available to school administrators.

Although WHS did not hold any official practices this summer, students have taken advantage of the weight room and running some passing routes following the AIA summer rules, according to Brownlee.

The school has also followed the AIA guidelines for phased reentry this summer. Brownlee said the first phase included screening players for illness, keeping groups to 10 or less and no ball handling. He said the school is now in phase 2, which allows for larger groups with ball time amid regular health screenings.

“A lot of phase one was spent in the weight room,” he said. “The school board allowed us to open as long as we do good cleaning and we spray everything down.”

Pending any changes, the AIA still has several meetings ahead as they wait for data to come into the governor’s office.

“They are trying to make sure all school districts have an opportunity to play sports, but do so in a safe manner,” Brownlee said.

Following the early August camp, Brownlee said there will be a player meeting Aug. 11 at 6 p.m in his office.

“Only players will be there so we can go over the rules for the upcoming season, which include the CDC and AIA guidelines,” he said.

On Aug. 12, there will be a mandatory parents meeting at 6 p.m. at Brownlee’s office.

He said the parents meeting is limited to one parent per household.

“We will try to keep everyone 6 feet apart and we recommend bringing a mask,” he said.

“These are solid dates, but we are going to have to be flexible,” Brownlee said.

Brownlee said he hopes to reach any interested students who he hasn’t seen this summer.

Brownlee said his goal is to win another state championship for Williams.

“We expect really good things,” he said. “But we’re trying to move on in a safe fashion.”

Brownlee encouraged students and parents to call him with any questions at (928) 814-6555.

Vikings volleyball takes first steps
Start of school athletics and activities delayed until Aug. 17
Are you ready for some football?
Back on the gridiron: Vikings ready for return run to state championships
Vikings get a jump on summer football program
Contact Us
Submit Questions, Comments, or Story Ideas