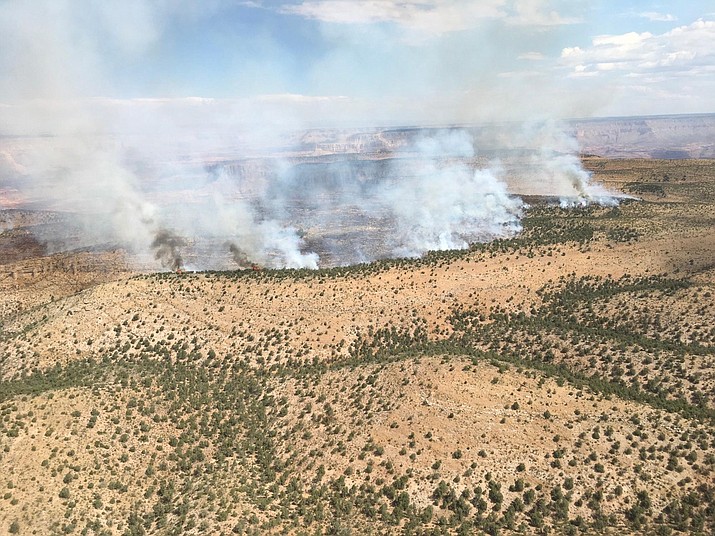 GRAND CANYON, Ariz. — The Thumb Fire, located on the northwestern edge of the Great Thumb Mesa, has grown to 6,726 acres as of July 21.

The Thumb Fire continues to expand to the south on the Havasupai Reservation pushed by gusty and erratic winds. The fire was mapped late July 20 at 6,726. acres. The Arizona Central West Zone Type 3 Incident Management Team was delegated the

management of the fire and is providing interagency support to Grand Canyon National Park, Truxton Canon Agency and the Havasupai Tribe. The team will continue suppressing the lightning caused fire while performing actions that protect identified sensitive natural and cultural resources.

The Incident Management Team will support firefighters that are working in the remote and rugged terrain north of Supai as they build containment lines and strengthen natural containment features like roads, trails, and rock outcroppings. Helicopters will provide water drops to support firefighters on the ground to slow the growth of the fire. Additional firefighting resources are on order to assist in the wildfire suppression effort.

Smoke from the Thumb Fire is visible from both the North and South Rims of the park.

At this time there are no closures within the park. Grand Canyon National Park is providing interagency support to the Truxton Canon Agency and the Havasupai Tribe. Resources assigned include two engines, a resource advisor, the Southern Paiute Agency resource module and two type one helicopters.

The Tipover Fire was also detected July 16 and is located north of Tiyo Point on the North Rim of the park.

Fire crews are actively working to suppress the lightning ignited fire. It is burning in ponderosa pine forest.

Because of increased fire danger, all wood burning and charcoal fires, including campfires, warming fires, and charcoal barbeques, will be prohibited on the South Rim of the park. This includes all campgrounds and residential areas. Pressurized liquid or gas stoves, lanterns, and heaters are allowed. Outdoor smoking is prohibited except within an enclosed vehicle or building.

These restrictions were implemented in response to current and predicted weather and fuel conditions, as well as corresponding fire danger rating levels. The purpose is to reduce the risk of fire in order to promote public health and safety and to protect resources during this time. These restrictions will remain in effect until significant precipitation falls and fire danger levels subside.

Visitors should use extra caution recreating on public lands when fire danger is increased. Firefighter and public safety remain the highest priority during wildfire season.