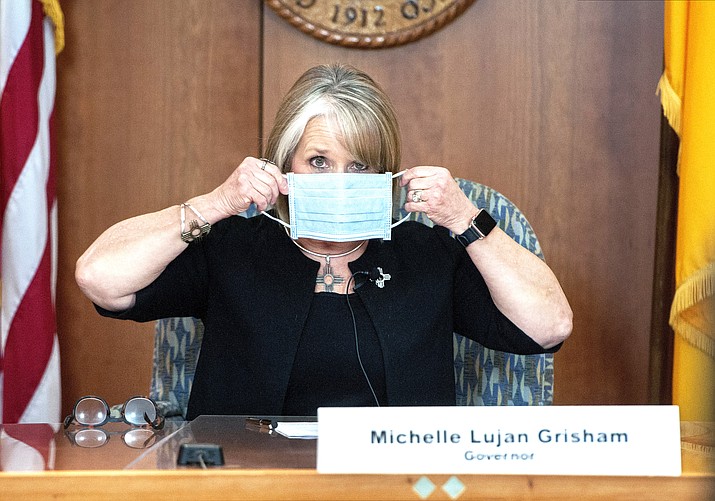 New Mexico Gov. Michelle Lujan Grisham puts on her face mask when not speaking during an update on the COVID-19 outbreak in the state during a news conference in the state Capitol in Santa Fe, N.M. Gov. Lujan Grisham used her line-item veto power to preserve executive control over hundreds of millions of dollars in federal coronavirus relief funding, a move that could mean the loss of additional financial assistance for some Native American communities. She used her veto pen to scratch out entire paragraphs of the budget to prevent the Legislature from earmarking $318 million in federal virus relief funding for local governments. (Eddie Moore/The Albuquerque Journal via AP, Pool, File)

Grisham unveiled sweeping revisions to the state's standing public health order that go into effect July 13, citing accelerating rates of infection across large expanses of the state including population centers in Albuquerque and Las Cruces.

With limited exceptions for essential business, Lujan Grisham urged residents of Texas in particular to stay away until a vaccine is found to reverse the spread of COVID-19.

She said nonresidents who enter New Mexico with out-of-state plates should be prepared to answer questions about their compliance with the 14-day self-quarantine mandate.

"We are at war with COVID-19," Lujan Grisham said. "We lost a battle I think at Memorial Day weekend."

Cancelled autumn sports include football and soccer — not only at public schools but also recreational leagues for all ages. People exercising outdoors will be expected for the first time to wear a mask — including runners.

Lujan Grisham said she is recommending that local universities follow the example of Ivy League schools and suspend collegiate contact sports for the fall. The first-term Democratic governor said that discussions are underway with Albuquerque's professional soccer team, New Mexico United, that could allow competition to resume, while "all bets are off" for now.

Plans to resume film production in an isolated "pod environment" are on pause, the governor said.

"We want them, we need them," said Lujan Grisham, a champion of tax incentives to the film industry and local studio operators including Netflix. "We just cannot have people coming into New Mexico with the kind of COVID-19 issues that we currently have."

The state Republican Party noted a gradual downward trend in mortality rates since mid-May and issued a statement calling the new restrictions illogical and inequitable.

"People again can't go inside a restaurant, but they can crowd the aisles at big-box stores that are taking New Mexico's hard-earned dollars out of state," GOP Chairman Steve Pearce said in the statement.

Health officials blamed the state's backslide into accelerating rates of infection on fatigue and frustration, and urged New Mexico residents to buckle down for the sake of neighbors, family and their own safety. Human Service Secretary David Scrase says that aggregated cellphone data on mobility proves that people are venturing out more.

"The No. 1 factor that is leading to the mobility of New Mexicans is COVID-19 fatigue," Lujan Grisham said. "I think that is a real thing."

The governor said she is weighing whether possibly to cancel or delay the state's scheduled Aug. 3 return to classrooms if the spread of the virus cannot be reined in by more responsible behavior such as wearing masks in public and avoiding gatherings, including family celebrations.

She pushed back against threats by President Donald Trump to withhold federal funds to public schools that don't fully resume classroom studies, defending the state's "science- and data-driven approach" to fighting the pandemic.

"I think it's a disastrous effort by the federal government without meeting their own CDC guidelines for safe school openings," Lujan Grisham said.

The state Public Education Department has issued guidance that requires schools to start the year in a hybrid learning mode with in-person attendance limited to half the normal classroom capacity, billing the plan as "a prudent and responsible process."

The state on July 9 announced six coronavirus-related deaths and 238 newly reported cases. Counties encompassing Albuquerque and Las Cruces had the most new cases.

New Mexico's seven-day average rate for positive tests has crept upward to 3.9 percent, according to data from the COVID Tracking Project. Arizona led all states with a roughly 27 percent rate.

The number of infections is thought to be far higher because many people have not been tested, and studies suggest people can be infected with the virus without feeling sick.

For most people, the coronavirus causes mild or moderate symptoms, such as fever and cough. For some, especially older adults and people with existing health problems, it can cause more severe illness, including pneumonia and death.

In anticipation of the Independence Day weekend, Lujan Grisham amended an executive order to require a 14-day self-quarantine for visitors to the state or residents returning from out-of-state travel.

Individuals who don't comply with the order run the risk of an involuntary quarantine by health officials, but it is unclear whether the provision is being actively enforced.

New Mexico still has a ban on public gatherings of more than five people and a stay-at-home order in place that discourages nonessential trips outside the home.

Further steps to reopen the economy have been put on hold through at least July 14, and the governor has warned that some prior restrictions could be reinstated.