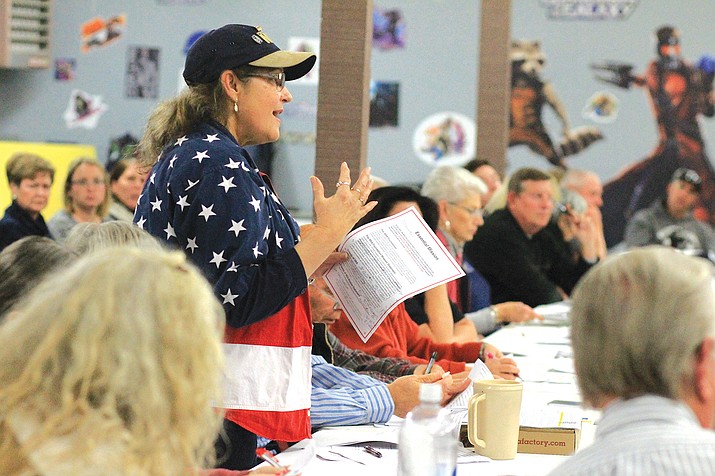 Patty Williams shares at a past Event Huddle in Williams. (Wendy Howell/WGCN)

Last year’s Event Huddle drew about 85 attendees from 64 organizations who came to discuss how they could work together to coordinate events and help each other.

Participants from nonprofit groups such as Williams Alliance for the Arts, Big Brothers Big Sisters, the Vikings Booster Club and the Camp Civitan Foundation joined with businesses and churches such as Old Trails True Value and St. John’s Episcopal-Lutheran Church to discuss their missions and plans for the year.

Organizer Kerry-Lynn Moede said the Event Huddle is not sponsored by any organization and is for groups to communicate and discuss their goals, plans and needs for the coming year. It’s also a time for groups to discuss possibly collaborating on certain projects.

“People are beginning to count on the event, I had several come forward asking me when it was going to take place,” Moede said.

Moede came up with the idea for the Event Huddle after hearing people talk about events that others were unaware of.

She said when people are aware of future events it helps reduce conflicting plans, and there are more resources available to help.

“We are getting more communication from the group and people are more aware of events,” she said. “The community only has so many volunteers to help.”

“It also helps people know what resources are available and helps them create more successful events,” she said.

Moede said the event has grown each year and she hopes that eventually the city of Williams could take it over.

“There are so many people buying into it, I really think it is a great event for the city,” she said. “Its very important in this town to build a volunteer base.”

“I’ve received a lot of positive feedback,” Moede said. “People are really getting a lot out of it.”

Moede said the Event Huddle is also a good chance for groups to network with each other. They have a chance to share their missions and brainstorm with other civic minded participants. They find out ways they can help other groups and receive help from those groups.

The Event Huddle is structured where groups are invited to present their plans to the crowd, but each group is strictly limited to three minutes. Anyone interested in attending needs to RSVP with Moede by email at jdmoede@aol.com or call her at (602) 818-6559.