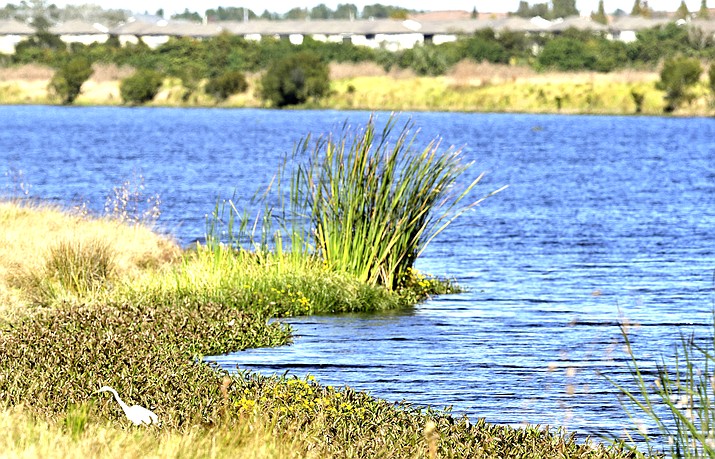 An egret looks for food along Valhalla Pond in Riverview, Fla. The Trump administration was expected to announce completion as soon as Jan. 23 of one of its most momentous environmental rollbacks, removing federal protections for millions of miles of the country’s streams, arroyos and wetlands. (AP Photo/Chris O'Meara, File)

WASHINGTON (AP) — The Trump administration Jan. 23 ended federal protection for many of the nation's millions of miles of streams, arroyos and wetlands, a sweeping environmental rollback that could leave the waterways more vulnerable to pollution from development, industry and farms.

The policy change, signed by heads of the Environmental Protection Agency and U.S. Army Corps of Engineers, narrows the types of waterways that qualify for federal protection under the half-century-old Clean Water Act.

Since his first weeks in office, President Donald Trump has targeted environmental and public health regulations that he says imposed unnecessary burdens on business. Speaking to farmers in Texas Jan. 19, Trump repeated his frequent charge that an Obama-era attempt in 2015 to more clearly define what water bodies qualify for federal pollution protection was "one of the most ridiculous regulations of all."

The changes Jan. 23 to the clean water rule have long been sought by builders, oil and gas developers, farmers and others. But environmental groups and public-health advocates say the rollback will allow businesses to dump pollutants into newly federally unprotected waterways and fill in some wetlands, threatening public water supplies downstream and harming wildlife and habitat.

EPA head Andrew Wheeler told reporters Jan. 23 that states were still free to step in with state protections of newly vulnerable waterways if they chose.

"Our rule protects the environment and our waterways while respecting the rights of states and property owners," Wheeler said. The rollback of the clean-water enforcement "strikes the proper balance between Washington, D.C. and the states," he said.

Brett Hartl, a government affairs director with the Center for Biological Diversity conservation advocacy group, called the changes "a sickening gift to polluters."

The administration's action "will allow wetlands, streams and rivers across a vast stretch of America to be obliterated with pollution," Hartl said, contending the rollback would speed extinction for dozens of endangered species. "People and wildlife need clean water to thrive. Destroying half of our nation's streams and wetlands will be one of Trump's ugliest legacies."

The Trump rule narrows the Obama administration's 2015 definition of what's a protected body of water and effectively removes safeguards for some waterways that had been put into place with the 1972 Clean Water Act.

The administration says the changes would allow farmers to plow their fields without fear of unintentionally straying over the banks of a federally protected dry creek, bog or ditch. But the government's own figures show it is real estate developers and those in other nonfarm business sectors that take out the most permits for impinging on wetlands and waterways, and stand to reap the biggest regulatory and financial relief.

Environmental groups said the draft version of the rule released earlier would have lifted federal protections for roughly half of the nation's wetlands and one-fifth of the millions of miles of waterways. The administration challenges that estimate and says it is not possible to come up with a solid figure for how much of the nation's surface water will be affected.

One of the biggest changes applies to so-called ephemeral waters - creeks and rivers that run only after rainfalls or snow melt. Such streams provide a majority of the water for some dry Western states, including New Mexico.

"That's a huge rollback from way before Obama, before Reagan," said Blan Holman, a senior attorney with the Southern Environmental Law Center.

New Mexico officials have particular concerns given that the Rio Grande, which provides drinking water and irrigation supplies for millions of people in the Southwest and Mexico, depends largely on the types of intermittent streams, creeks and wetlands that could lose protection under the rule draft released earlier. The Rio Grande is one of North America's longest rivers.

In a statement, Democratic Gov. Michelle Lujan Grisham called the new rule "an absolute disaster for the state''s water resources.

Another key change removes federal protections for wetlands deemed not directly connected to a major waterway. Geoff Gisler, senior attorney at the Southern Environmental Law Center, said it appears millions of acres of the wetlands on the Southeastern coast alone — vital buffers against flooding and climate change — would lose protections, as would so-called prairie pothole wetlands in the middle of the country, and others.

The final rule will be published in the Federal Register in the next few days and become effective 60 days after that.

Environmental groups and some states are promising legal challenges. But Gisler fears developers and others will take the Jan. 23 announcement as a signal, and move quickly - "get the bulldozers lined up, and day 61 fill in streams amd wetlands," he said.

In South Dakota, farmer Arlen Foster said Thursday that many farmers believe that wetlands restrictions went too far even before the EPA adopted the 2015 Obama-era rule. And EPA isn't the only agency that can affect farmers' use of their land, he said. The U.S. Supreme Court in 2017 rejected his petition challenging an Agriculture Department system that determined a small tract of his land was a wetland. He had argued that repeated snow melt led to standing water.

"These issues illustrate that ... regulations got out of hand and have gone too far," he said.