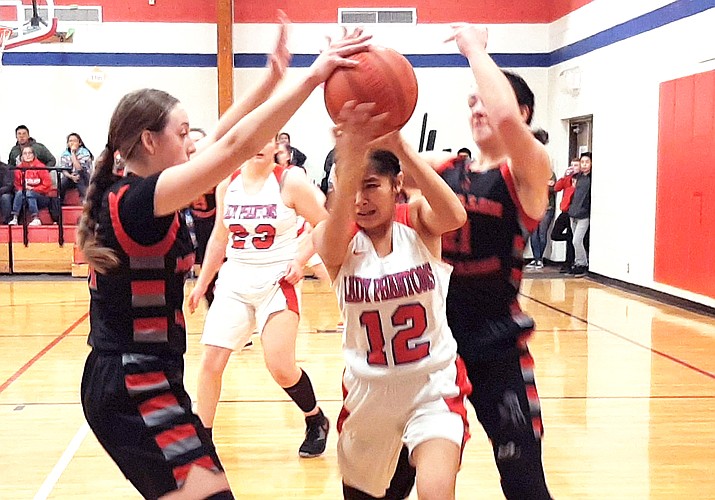 At 5:30 p.m., the teams ran onto the court amid cheers from fans and family. High schoolers in mostly red jackets made up much of the audience. They were there to cheer on friends and classmates.

"It's a lot of fun," One fan and park resident said. "Especially since I used to coach."

The first period had a fairly standard opening, points scored on both sides. It ended with the Phantoms in the lead, 13-10.

An early rebound marked the first points of the second period, Mogollon tying the game, but not a minute after, the Phantoms pulled ahead again. The score was passed back and forth throughout the period, which was full of mishaps.

Early on, a Phantom player skidded to the ground, starting a short pile-up. Again, players took the floor, passing the ball between outstretched arms. But soon it happened again, a fall, and one Mogollon player didn't immediately spring back up. She lay on the polished wood, holding her side.

“Lost her mouth guard,” the crowd murmured. “I think she landed on her hip.”

The player left the court to applause.

Later, the whistle blew again as the ball flew into the bleachers. Second period ended with Mogollon ahead, 23-21.

During half-time, the winners of a door prize raffle were announced and the varsity boy’s warmed up with some choreographed stretching.

The game resumed with high energy from players on both teams. The ball spent a lot of time in the air, and passes were more ambitious. A free throw for Grand Canyon, and the bleachers rattled from stomping fans. Two, three, four free throws, for both teams. Though higher now, the score was still tied with six seconds left in the period. A Grand Canyon player took a shot right as the buzzer sounded. It circled the rim and went in with a score of 33-31, Phantoms.

The fourth period began with passing, and the repeated chant of "defense!" The whistle blew for another free throw. Grand Canyon had eight penalties by now and Mogollon, two. The Phantoms scored several times at the start of the period, though the score was always close. This was proven when the Mustangs managed to tie again, and then pulled ahead with a pair of successful free throws. The score continued to pass between the teams.

With 50 seconds to go, the Mustangs made a free throw and pulled ahead by one. With 13 seconds left, they landed several more. One last time-out was called and both teams cheered as they broke for the end. Ten seconds. The Phantoms had the ball, went for a three-pointer, and made it. The crowd's noise filled the gym as the buzzer sounded. Fourth period was over and the game was again tied, 51-51.

Loud music played as both teams went out to the court for overtime. Mogollon got possession early and quickly scored. At this point, every player was clearly putting in a lot of effort. With two minutes to go, they were mostly passing. Then Mogollon scored again. At thirty seconds, there was a successful free throw and a failed one (both for the Mustangs) and then the Phantoms managed a rebound. It wasn't tied yet, but closer. The final thirty seconds lasted longer as both teams kept trading free throws. When the final buzzer sounded, the score was 59-54, and Mogollon had won.