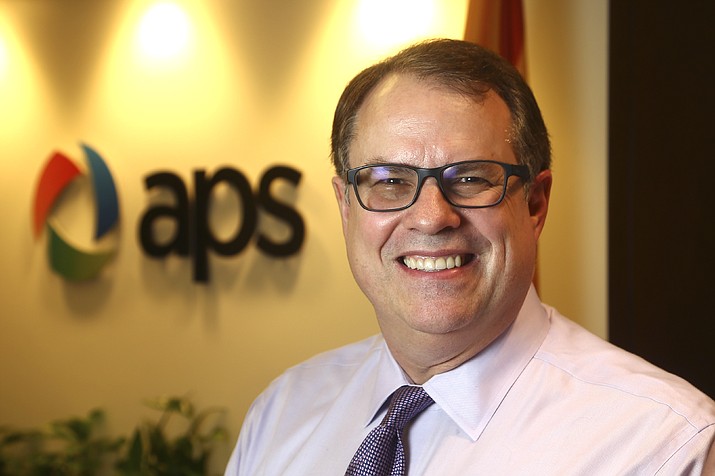 Arizona Public Service chairman and CEO Jeff Guldner poses for a portrait Tuesday, Jan. 21, 2020, in Phoenix. Arizona's largest electric utility announced that it plans to switch to 100% carbon-neutral power generation by 2050, with a goal in 10 years of hitting the 65% mark. (Ross D. Franklin/AP)

PHOENIX (AP) — Arizona’s largest electric utility said Jan. 22 that it plans to switch to 100 percent carbon-neutral power generation by 2050, a sharp turnaround from a company that spent tens of millions of dollars two years ago to fight a ballot measure requiring it to use renewable sources.

The move by Arizona Public Service is the latest in a string of targets set by states or utilities in the U.S. West to go carbon neutral as climate change pushes the region away from traditional sources like coal. Domestic coal-fired power generation has declined 40 percent over the past decade, contributing to a steep decline in coal mining and several bankruptcies.

APS Chairman and CEO Jeff Guldner said the plan is different than the defeated ballot measure known as Proposition 127, which would have required utilities to get half their power from renewable sources by 2030. The new plan comes close to that but can be changed if needed.

“Flexibility is always the best thing to have when you’re dealing with future energy policy,” Guldner said. “The biggest concern we had with 127 is there was no flexibility. It would have been ingrained in the (state) Constitution.”

As part of the plan, the company will close a major New Mexico coal-fired power plant seven years early but rely on the nation’s largest nuclear power plant as it adds renewable power, battery storage and other sources.

The company operates and owns the majority of the massive Four Corners Power Plant outside Farmington, New Mexico. It uses coal from a mine in the Navajo Nation, and 80% of its 327 workers are Native American.

The company plans to keep relying on the Palo Verde Nuclear Generating Station west of Phoenix to provide about 25 percent of its power past 2050. The three-reactor plant is the largest in the nation and will be more than 60 years old by then. It produces power with no carbon emissions.

By 2030, APS expects 65 percent of its power to be carbon neutral, including 45 percent from renewable sources. The company spent $38 million in 2018 to fight a proposal requiring half its power come from renewables by the same year.

In the U.S. West, major utilities in New Mexico and Colorado have announced similar plans. California plans to be carbon neutral by 2045, while Nevada passed a law requiring 50 percent renewable power by 2030.

APS expects to use utility-scale solar power plants, greatly increase battery storage and see growth in rooftop solar. Homeowners are installing solar panels even after Arizona regulators cut the amount they can get for pumping excess power back into the grid. Natural gas will be a significant bridge as the company seeks new technology to replace gas power plants.

APS will stop using coal for power generation by 2031, when it plans to end operations at Four Corners. A major plant in northeastern Arizona that APS bought power from closed last year, and it plans to shutter the two units its owns at the Cholla Power Plant in eastern Arizona in 2025.

APS came under fire in recent years for spending millions to back favored candidates for the Arizona Corporation Commission, which regulates utilities and must approve the company’s plans.

Guldner, who took over as CEO in November, told regulators this month that the utility won’t spend on future commission elections.

The decision to move to carbon-free power by 2050 was partially driven by public support for ideas behind the ballot proposal, Guldner said. The measure was initially popular but lost by a wide margin after APS spent big to highlight its costs to consumers. APS also has been hearing from major customers and others about clean power.

Clean power advocates praised the company’s plan but said it was clear APS could have met the terms of the 2018 ballot proposal.

“We think it’s a good start,” said Sandy Bahr, director of the Sierra Club’s Grand Canyon Chapter. “Obviously, we need to be going carbon free. Climate change is the biggest challenge we face, and it’s certainly affecting us big time in here in Arizona.”

Tom Steyer, a Democratic presidential candidate and billionaire who funded much of the campaign backing the proposition, called the announcement “a huge win for the people of Arizona.”

“Our efforts behind Proposition 127 in 2018 have moved the state to a clean energy future,” he said in a statement.

APS aims to send a clear message to industries supplying utilities that it needs innovative ideas to boost carbon-neutral power.

“That 2050 piece is not just a symbolic commitment,” Guldner said. “It’s meant to be a signal that says this lets us focus on solving the gaps in the technology and the gaps we have today so that we can get there.”