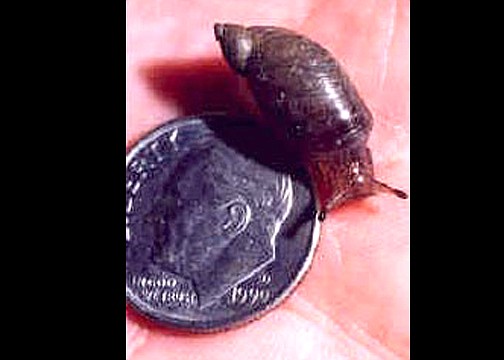 A Kanab Ambersnail moving along the edge of a dime for scale. (Photo/Arizona Game & Fish Dept.)

GRAND CANYON NATIONAL PARK, Ariz. (AP) — An amber-colored snail found in Arizona and Utah could be losing it status as an endangered species.

The U.S. Fish and Wildlife Services wants to remove the Kanab ambersnail from the list of threatened and endangered species, saying it’s not a valid subspecies. The small snail with a spiral shell is not genetically different from other ambersnails in the region and not at risk of extinction, the agency said.

The public has until March 6 to weigh in on the proposal.

The snails make their home in a series of ponds near the city of Kanab, Utah, and in two spots along the Colorado River in Grand Canyon National Park. They can live about a year.

The Kanab ambersnail has been on the endangered species list since 1992.