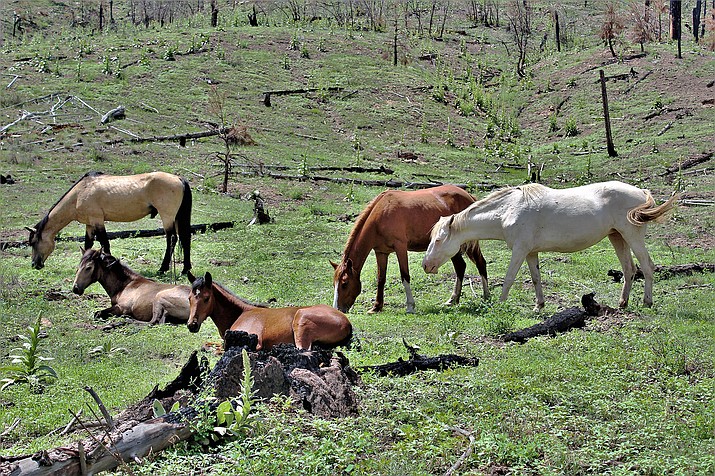 HEBER-OVERGAARD, Ariz. (AP) — U.S. Forest Service officials confirmed that seven more wild horses have been found dead in eastern Arizona after eight others were found earlier this month and said at least some were shot.

“Several horses died due to bullet wounds” but other carcasses were too badly decomposed to determine the cause of death, Apache-Sitgreaves National Forests officials said in a statement Jan. 17.

An Apache-Sitgreaves spokesman did not immediately respond Jan. 18 to a query from The Associated Press.

The statement said the 15 carcasses were found in a ranger district headquartered in Heber-Overgaard, a rural community 109 miles northeast of Phoenix.

According to the statement, evidence was limited because some of the carcasses “had been exposed to extreme weather conditions over extended periods of time.”

Also, officials were “collaborating across jurisdictions while deploying additional patrol officers and using “all of the investigation tools that are available,” the statement said.

It said officials welcomed tips provided to law enforcement but said the pubic should avoid “interfering with these active investigations as any such disturbances could jeopardize the critical work that law enforcement officials are conducting.”

A Jan. 11 Apache-Sitgreaves press release said a person causing the death or harassment of a wild horse can be fined up to $2,000 and imprisoned for up to a year.