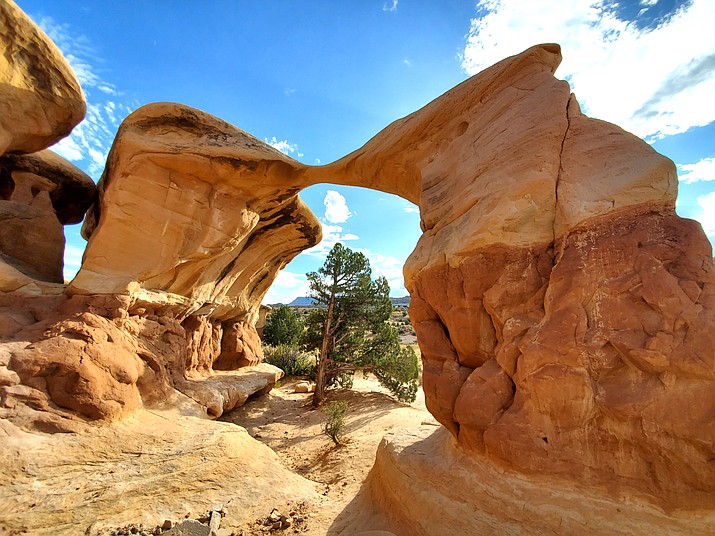 Historically tribes from across the Southwest used the pinyon and juniper for various purposes, a tradition that continues today. (Mike Popejoy/Grand Canyon Trust)

FLAGSTAFF, Ariz. — If you’ve ever visited the Southwest, you’ve probably walked or driven through pinyon and juniper forests.

From Mesa Verde National Park and Grand Staircase-Escalante National Monument to Cibola National Forest and the Grand Canyon, pinyon and juniper are quintessential to the Colorado Plateau. The stubby, gnarled trees survive in the extremes that characterize the region — brutal heat, bitter cold, and a characteristic lack of water.

Rooted in survival and ceremony, cultural uses of pinyon and juniper for the Diné, Hopi, Paiute, Ute and other Native peoples range from food and medicine to firewood and art. The importance of the trees goes far beyond calories, warmth, and shelter, though. To Indigenous peoples, pinyon and juniper represent a way of life — a long-standing connection to the land — that continues to this day.

Pine nuts — the buttery morsels hidden in pine cones — have been a staple for Native peoples for thousands of years. Historically, Native groups ate the raw nuts, ground them into a pine nut flour, made pine nut butter, or used them in soups. Cultural uses remain similar today, and the annual fall harvest of pine nuts is an important social and ceremonial tradition.

Pinyon pitch — the almost crystallized, sap-like substance — is used in salves for open cuts and sunburns, and is ground into powder as an antiseptic for wounds. It is also used to fill cavities in aching teeth. Some Native peoples even used the powder from rotted pinyon wood as a substitute for baby powder.

Benally, says that in Diné tradition, one must go through a three-day-long ceremony in order to receive blessings to remove a plant for medicinal or ceremonial use. He said peole must make an offering to take a plant’s power because a plant’s power is to be respected and not taken lightly.

Construction, art, and other uses

Wood from pinyon and juniper trees, proves valuable as a raw material for construction projects. It's used to build fences, corrals, cradles, agricultural equipment and roofs. Wood also makes useful household tools, like ladles and hairbrushes, and weapons, such as bows and clubs. Beyond utilitarian needs, juniper seeds are the perfect beads for jewelry, and the berries stain pottery and skins. Pinyon pitch, due to its sticky nature, waterproofs items like canoes and pottery and helps cement turquoise and other gems into jewelry.

Pinyon and juniper forests at risk

Much depends on the health of pinyon and juniper forests — the culture and traditions of Native people, the future existence of key wildlife and plant species, and the health of the climate.

For decades now, the Bureau of Land Management has moved forward with efforts to clear pinyon and juniper forests. In reality, these "vegetation projects" often turn forests into grazing lands as machines rip out, mow down, and shred pinyon and juniper trees. Within the original borders of Grand Staircase-Escalante National Monument, the BLM had proposed the removal of over 100,000 acres of pinyon and juniper woodlands.

Karlos Baca (Tewa, Diné, and Nuu-ciu), a renowned chef and founder of Taste of Native Cuisine, said the problem with these vegetation treatments is that the federal government does not understand symbiosis and the relationships between plants and the land.

Take the Four Corners potato, possibly North America’s first cultivated plant, for example. According to Baca, it only grows in pinyon, juniper, and oak forests on the Colorado Plateau and has been used by Indigenous peoples for thousands of years. Messing with pinyon and juniper forests could risk the 11,000-year history of the Four Corners potato.

The Grand Canyon Trust remains committed and stands ready to call out and challenge the BLM and other federal agencies when they pursue these damaging projects.

“Everything is related, and all is needed. I understand this because I grew up here and have foraged in these lands my entire life,” Baca said.

We must all work to protect and conserve the precious pinyon and juniper forests of the Colorado Plateau so that they may continue existing beyond our time.