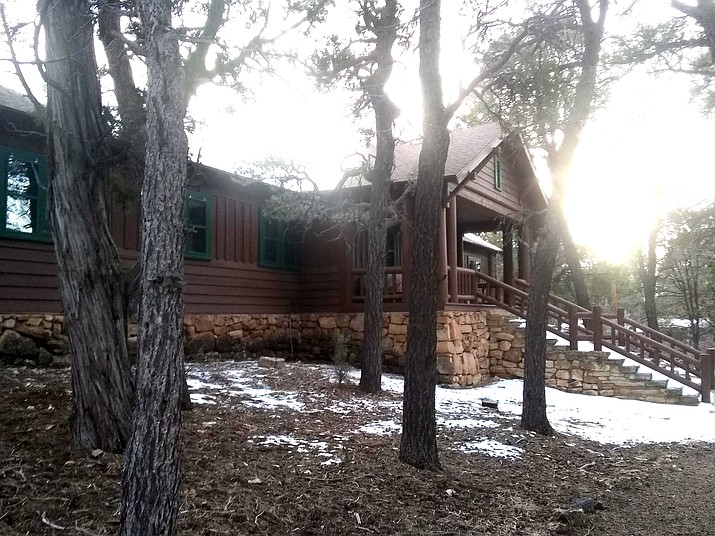 The current Grand Canyon Conservancy building was once used as a hospital as well as employee housing. (Abigail Kessler/WGCN)

GRAND CANYON, Ariz. — Atop a hill on the main Grand Canyon Village loop, near the public library, there’s an unassuming building with a wooden sign out front that reads Grand Canyon Association. While it currently houses the latest form of that organization, the Grand Canyon Conservancy, it was intended to serve a much different purpose.

Originally erected as a hospital in Grand Canyon National Park’s early years, the building has served many functions throughout its history.

The Old Hospital, as it’s referred to in a 2008 Historic Structure Report, was first constructed as an attempt to improve the quality and consistency of medical care available in the village. When the park first opened, treatment options were limited to a Fred Harvey resident nurse or any doctors who might be visiting the area or heading to either Williams or Flagstaff for more extensive treatment.

After the park started hosting resident doctors, new problems began to appear. During the first three years of the program (1920-1923), four different doctors occupied the position in succession. One of the problems, park superintendents suggested, might be the lack of a dedicated space. There wasn’t much selection, to the point where doctors had to use empty boxcars and cabins as offices. In 1929, various companies operating within the park agreed on a plan to construct a hospital in the village.

The hospital was to be built in the rustic style of architecture popularized by the park service. Rustic architecture tried to use local materials and build structures that faded seamlessly into the landscape. Rigidity and hard lines were to be avoided, with the central idea being “to achieve…sympathy with natural surroundings and with the past,” according to the 2008 Historic Structure Report.

To keep with these ideals, local wood and Kaibab limestone was used to construct the first Grand Canyon Hospital.

The hospital served several functions for park residents and visitors, as was typical of rural hospitals at the time. These included a maternity ward, two- and four-bed patient rooms and a small pharmacy, among others.

Various modifications and improvements were made to the building during its time as hospital, in 1968, a new modern hospital was to be built in the park in a more central location, and all medical care in the park would be relocated.

After medical care was moved to the new building, the Old Hospital went through a few different forms. It was first converted to employee housing, then slated for removal, before the Grand Canyon Conservancy requested to use it for its offices in 1987.

As might be expected from the sign out front, the building currently serves as a base of operations for the Grand Canyon Conservancy, though they still occasionally get visitors who remember how it used to be.