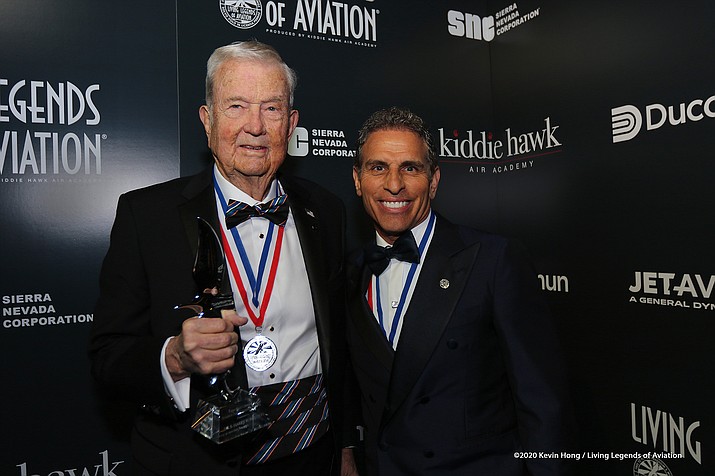 Hailed as the “most remarkable people of extraordinary accomplishment in aviation and aerospace,” The Living Legends of Aviation honors the most accomplished men and women in aviation and supports the Kiddie Hawk Air Academy, which is dedicated to introducing, educating and sparking children’s interest in aviation.

Robertson was nominated for induction into the Living Legends of Aviation by Major General Carl H. McNair Jr. The nomination honored Robertson’s invention of “Robbie Tanks” which has saved thousands of lives.

“Harry Robertson’s impactful work on creating crash-survivable, ballistically self-sealing fuel systems for the rotorcraft industry and military forces has saved over 9,000 lives and continues strong for over 40 years.” said Newman Shufflebarger, President of Robertson Fuel Systems. “Everyone at Robertson is proud to continue Harry’s legacy of saving lives and this award is a testament to the skill, ingenuity, and dedication of his legacy.”

Robertson is one of the most significant figures in aviation in the past 50 years and is recognized as “The Father of the Crashworthy Fuel System.”

Past recipients of the Ken Ricci Lifetime Aviation Entrepreneur Award include Sir Richard Branson, founder of Virgin Atlantic Airlines and Virgin Galactic and Frederick Smith, founder of FedEx. More than 700 people, including many of the “Living Legends of Aviation” themselves like Jeff Bezos, John Travolta and Harrison Ford, attend the annual awards ceremony, which will benefit the Kiddie Hawk Air Academy.

Robertson said his favorite thing now is the time he spends at Pine Springs Ranch in Williams where he tends cattle with a caretaker, and enjoys the quiet.

Robert Fuel Systems is a HEICO company based in Tempe, Arizona, designs, develops, produces and sustains crashworthy and crash resistant primary and auxiliary fuel systems for military and civil applications. HEICO Corporation is a New York Stock Exchange listed company (NYSE: HEI and HEI.A). The company’s technology-driven and electronics products have been used for aerospace, industrial, and defense industries for more than 60 years.

The ”Living Legends of Aviation Awards” are produced by the Kiddie Hawk Air Academy, a 501-c-3 non-profit organization. Kiddie Hawk’s mission is to educate children and spark their interest in aviation/aerospace. More information is available at livinglegendsofavation.org.