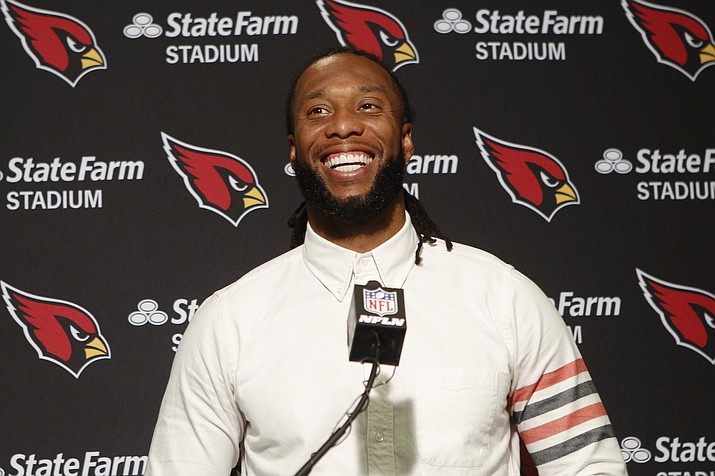 There was speculations the 36-year-old Fitzgerald might retire, but the team announced Wednesday, Jan. 15, 2020, he has signed a one-year contract. (AP Photo/Frank Victores, File)

TEMPE, Arizona (AP) — Larry Fitzgerald didn't keep the Arizona Cardinals waiting for long. One of the most productive wide receivers in NFL history isn't done yet, returning for his 17th season with the franchise that drafted him in 2004.

After some speculation that the popular 36-year-old Fitzgerald might finally retire, the team announced Wednesday he has signed a one-year contact that will keep him in the desert through 2020.

“This season was among the most fun of my career," Fitzgerald said in a tweet. "The future is so bright for this team & I relish the opportunity to build with this talented young nucleus.”

Fitzgerald was a key part of the Cardinals' offense in his 16th NFL season, leading the team with 75 catches for 804 yards and four touchdowns. He repeatedly said how much he enjoyed playing with rookie quarterback Kyler Murray, who was the No. 1 overall pick in last year's draft and quickly developed into a quality starter. He also was quick to praise first-year coach Kliff Kingsbury.

Now they'll get a second shot to make the playoffs together. The Cardinals had a 5-10-1 record last year, which was last in the NFC West. But the franchise showed growth as the season progressed, including a road win over playoff-bound Seattle on Dec. 22.

Fitzgerald's future was a little uncertain after the Cardinals lost to the Rams on Dec. 29 in the regular-season finale. Though his on-field performance showed he was still a high-quality NFL receiver, he often talks about how he's got other interests and would take a few weeks to make his decision.

Kingsbury said he'd make his pitch for Fitzgerald to return. Teammates wanted him back, too, though nobody seemed totally certain what his final decision would be.

Now the speculation is over. He'll be 37 before the start of next season, but there's little sign he's slowing down.

In the 2019 season finale against the Rams, Fitzgerald appeared in his 250th career game for the Cardinals, becoming the first wideout and 13th player in NFL history to appear in at least 250 games with a single team.

An 11-time Pro Bowler, Fitzgerald has played all 16 games in each of the last five years (2015-19) and his streak of 84 consecutive starts is the longest active streak among NFL wide receivers.