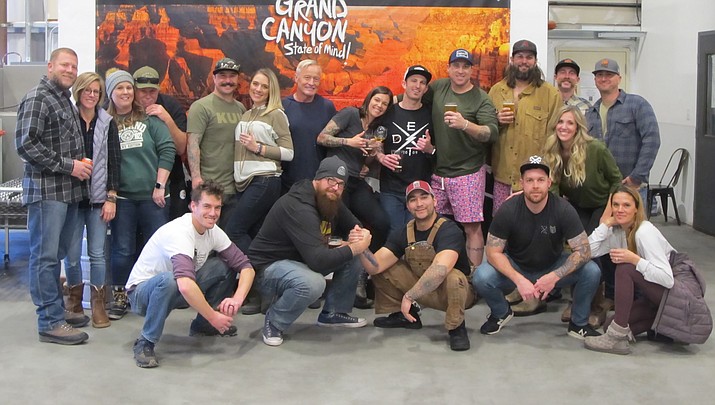 Firefighters from Goodyear, Phoenix, Sun City and Daisy Mountain make the trek north to The Grand Canyon Brewery and Distillery to honor their fallen brother, Austin Peck Jan. 11. (B. Garibay/WGCN)

WILLIAMS, Ariz. — Austin M. Peck is a name most Williams residents do not recognize. He was not raised within the community, has no relatives in the region and he spent little, if any time embracing the town’s beauty and the people who love it so.

Peck was a 35-year-old firefighter with the Goodyear Fire Department who tragically lost his life August 31, 2019 after a four-year battle with an extremely rare form of cancer he contracted while helping those that needed it the most.

Peck left behind a wife, two young daughters, a firefighting family and a mass of medical bills that smother any sense of peace one would hope to find. As Peck’s body feverishly fought the cancer that was viciously assaulting it with stealthy silence for over 48 months, Erin, Peck’s wife, was in a looping battle with the city of Goodyear and an insurance company that refused to cover the treatment that would help Peck extend his life; due to a technicality.

Peck’s form of cancer was so rare, that it is not on the list of nearly 20 cancers found under House Bill 216 requiring insurance companies to cover all expenses for the treatment of occupational cancer. 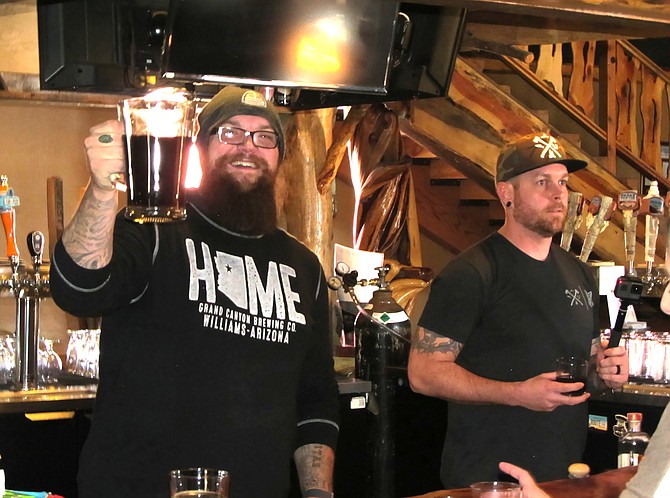 Grand Canyon Brewery’s director of sales and marketing holds up the first pitcher of “Brew 42”. (B. Garibay/WGCN)

On Jan. 11, Grand Canyon Brewery and Distillery in Williams began taking the first steps in creating “Brew 42” a specialty beer honoring Peck. Grand Canyon Brewer Ronnie Enriquez helped create the brew, from which 50 percent or more of all sales will go directly to the Peck family. The goal of the sales is to help alleviate Peck’s medical expenses accrued over the last four-years. More than a dozen firefighters from across the Valley made the journey north to be part of this event.

In the early twilight of Peck’s life, the glowing dreams of one day becoming a firefighter glistened in the foreground, and in 2008 at 24, those dreams manifested into reality. For seven years Peck transcended the expectations of the firefighting standard. It was a discipline he applied not only to his professional life, but his personal life as well.

“Austin was a barrel of dynamite packed into a tight little package,” said Peck’s cousin, Ricky Quinn. “He would walk into a room and the lights would brighten, the smiles would raise and the environment would just become more positive. This was the type of influence he had.”

In 2015, Peck was diagnosed with sinonasal undifferentiated carcinoma (SNUC), a very unique and lethal form of cancer. SNUC is a sinus cancer that spreads like a weed and attacks with unbridled tenacity, and due to the rarity of the disease, doctors have done very little research in discovering treatments or examining options to fight it. At the time of Peck’s initial diagnosis, he was told there was only an 18 percent chance he would survive another five months, with treatment. But Peck, through sheer determination and perseverance, lived on for four more years.

Erin and Peck scored the internet with focused resolution in hopes of uncovering some sort of treatment that could save his life. The couple even relocated to California for four months in search of answers, leaving their then six and three-year-old daughters behind with Peck’s parents. Erin was forced to quit her job as a labor nurse to become his full-time caretaker and advocate.

Peck was forced to retire from the fire department after his diagnosis. And then his benefits were stripped from him. Peck filed four claims with the city of Goodyear for workers’ compensation and was denied four times. They rejected his claim that he contracted cancer while on the job, although Peck and his family believed that he had occupational cancer.

Erin spent countless hours on hold with the insurance company pleading for help as Peck’s medical bills soared into the hundreds of thousands of dollars. Before his diagnosis, the Peck family was financially sound and preparing to build their dream home. After selling off many possessions to cover medications and treatments, the family was drained of financial solutions and shackled with a mounting debt.

At the time of Peck’s death, bills were piling up and bill collectors continue to call Erin.

During this time, Grand Canyon Brewery graphic designer and brand manager Kevin Callaway came up with an innovative solution for aiding the Peck family.

“I went to college with Austin’s older brother Cody at NAU and my wife went to school with members of the family as well,” Callaway said.

Callaway and the Pecks shared mutual friends within the Goodyear Fire Department and become significantly closer over time. It was in the Dublin Pub at Peck’s funeral that Callaway began to hatch a solution for the Peck’s financial trouble.

“Austin made a video towards the end of his life that was played at his funeral services and one of the things he said that he enjoyed the most was being able to spend a night out with his friends, having a couple of beers and forgetting about his situation for a moment,” Callaway said. “That’s where the idea of brewing a beer married up with giving back originated.”

“Brew 42” is the specialty beer that will honor Peck. It will be available not only at the Grand Canyon Brewery Tap House, but multiple locations throughout the Phoenix metropolitan area. The brew is an amber style ale, with a sweet, yet smooth flavor and deep pine pitch color that will be ready for consumption in early February.

Peck’s family and friends released his ashes into the eternal winds of time while sky-diving over the sandy Arizona desert on a cool November day.

“Austin was a phenomenal human being,” said best friend James Cantelme. “Austin was more than just a firefighter, father and friend; he was a great human being.”

Donations can be made to help support the Peck family on GoFundMe.