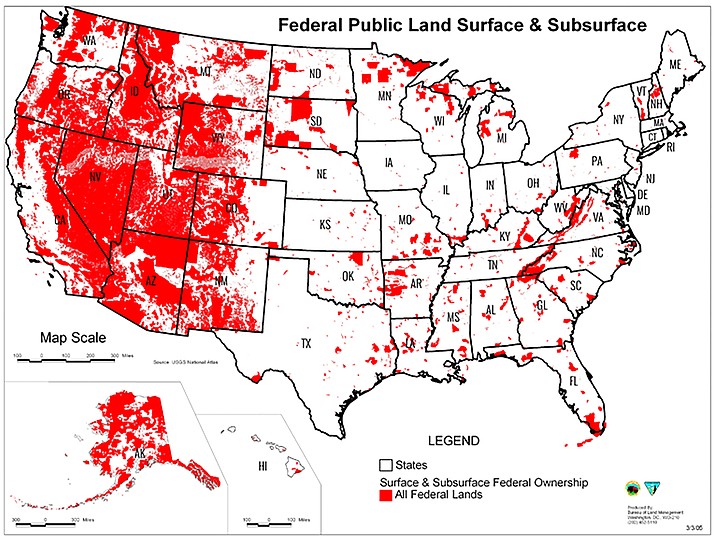 Red portions of the map show percentages of federally controlled land in each state. (Photo/http://www.americanlandscouncil.org/arizona)

PHOENIX — Fearing an eroding tax base, two Republican legislators are leading efforts to block private individuals from giving away property to the federal government.

The identical proposals by Rep. Mark Finchem of Oro Valley and Sen. Sonny Borrelli of Lake Havasu City would prohibit the sale, gift, grant or any transfer of an ownership interest in private land "without the express, affirmative consent of the Legislature and the governor.''

But both SB 1046 and HB 2092 also contain language that suggests larger issues may be at work, including language about forging "a political solution'' that could require the federal government to give up some of what it already owns.

At the heart of the issue is the complaint that the federal government already controls too much of the state's land.

"We've only got 16 percent of our land that we can use for property tax,'' Finchem said, with the balance being public and tribal lands. And that 16 percent, he said, is all the state has to fund critical services like education, public safety, infrastructure and welfare.

The immediate goal, Finchem said, is to stop further erosion.

"We can't afford to have one acre go into federal possession and be off the tax rolls,'' he said. The legislation, Finchem said ensures that any future transfers have the approval of the majority of the Legislature as well as the governor.

Many lawmakers have complained about the lack of private lands for years. But Finchem said current activities in Congress made this legislation especially critical.

That involves the Land and Water Conservation Fund which was created in 1964 to create recreation and conservation areas. That includes protecting national parks and forests as well as provide public access to rivers and lakes.

The law authorizes the fund at $900 million a year, financed largely from federal oil and gas leases on offshore drilling.

What has happened, though, is the annual appropriation becomes part of the budget negotiation process in Washington. The result often is less than that, with the allocation for the 2019 fiscal year at $506.6 million.

Legislation pending in the U.S. House would make full funding automatic — and perennial — without further congressional authorization. And that worries Finchem.

"They would like to buy more land,'' he said.

What that automatic appropriation would do, Finchem said, is get around fights over presidential action to set aside land for national monuments.

He specifically cited the decision of the Obama administration to create the Bears Ears National Monument, a move that could have protected about 1.35 million acres in Utah from certain activities, including mining. That was reversed by President Donald Trump, who downsized the monument to slightly more than 200,000 acres.

Finchem said the federal legislation, HR 3195, would allow creation of new federal lands in ways that shield them from political and legal fights.

"There is a certain group in Congress that has figured out, well, if we buy the land, then we're good,'' he said. "That can't be undone.''

While Finchem can't affect what happens in Washington, he figures his legislation can ensure that federal agencies don't use all that new money to buy up more Arizona private property and take it off the tax rolls -- at least not without legislative and gubernatorial consent.

Taylor McKinnon, senior public lands campaigner for the Center for Biological Diversity, thinks the legislation is a bad idea. He said the Land and Waster Conservation Fund has paid for thousands of state and local projects.

"It's troubling that legislators in the Grand Canyon state don't seem to grasp the natural and economic values of Arizona's spectacular public lands,'' he said. McKinnon said that "misguided attempts'' to restrict conservation efforts threaten the state's $1.4 billion outdoor recreation industry as well as local economies tied to that.

Underlying much of the dispute of this is the fact that Arizona — and many other Western states — were admitted to the Union under the condition that the federal government retained title to much of the land.

Finchem contends that is neither fair nor legal, particularly given that other states were admitted without similar conditions.

"We were told we were going to be a state (and) we'd be completely a state,'' he said.

"And we're not,'' Finchem said. "We're still treated like a territory.''

His legislation says there is "historical evidence'' that both Arizona and the federal government, expected in 1912 when Arizona became a state, that public lands within the state would be "disposed of consistent with past practice.'' And it says that there also is evidence that there was never an intent of the federal government to forever retain holdings within states.

"I would love to have them give back what they have taken from us,'' Finchem said.

"That is a direct positive impact for public education because that land goes back on the tax rolls.''

But how would that happen?

"I don't know,'' Finchem conceded. "That would have to be a negotiation with the feds.''