Bringing the wall: Traveling replica of the Vietnam Memorial Wall coming to Williams 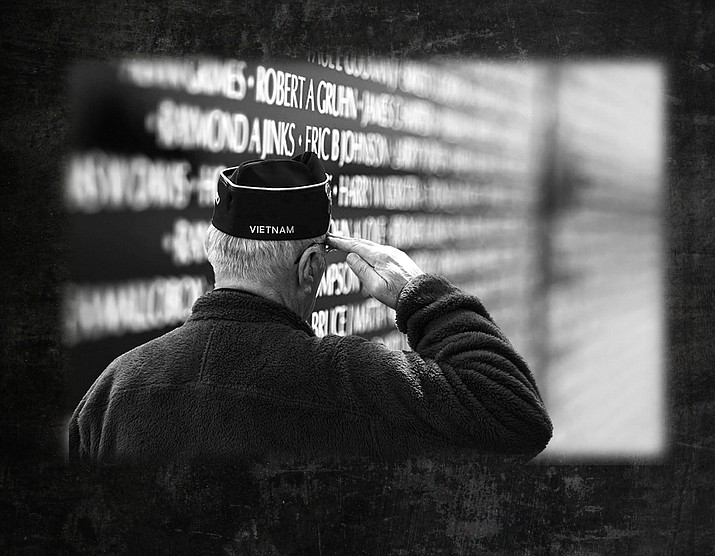 The Moving Wall will be on display in Williams June 4-8. The city of Williams is sponsoring the event. The Moving Wall contains the names of Vietnam veterans killed or unaccounted for during the Vietnam War. (Photo courtesy of The Moving Wall/graphic Wendy Howell)

WILLIAMS, Ariz. — The Vietnam Veterans Memorial in Washington, D.C., is a powerful exhibit that commemorates the 58,320 American service members who died or are unaccounted for from service during the Vietnam War.

The memorial receives nearly 3 million visitors each year, but not everyone is able to visit it.

To share the powerful feeling of seeing the names inscribed on the massive black granite structure, The Moving Wall, a 252-foot mobile replica of the Vietnam Memorial Wall in Washington D.C., is coming to Williams this summer.

People unable to make the long journey to the monument in Washington, D.C., can still pay tribute to those who died or are missing in action, on a smaller scale. The Moving Wall is a traveling replica of the memorial that has made its way to over 1,000 cities since 1984. 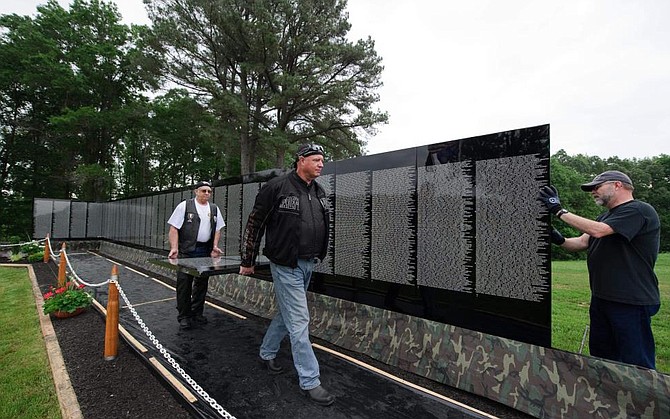 “I’ve been trying for years to get this to come to Williams,” said Mayor John Moore. “We had several kids killed from this community in Vietnam, we need to do something for them.”

The concept and construction of The Moving Wall developed from the efforts of Vietnam veterans John Devitt, Gerry Haver and Norris Shears who were concerned with keeping the monument relevant and accessible to everyone. They wanted to share the powerful experience people have when seeing the 58,320 names in person.

Devitt attended the original dedication of the Vietnam Veterans Memorial in 1982 and felt the powerful effect of seeing the names of the fallen written on the wall. He vowed to bring that experience to those who couldn’t travel to Washington D.C.

“This is a people’s project, its not a project brought by any one Williams organization,” Moore said. “I would like to get the entire community involved with the project.”

Construction for the project began in February 1983 with $2,500 Devitt and Haver pooled together; it was completed in October 1984 with significant contributions from the public. The wall is roughly half the size of the original Vietnam Veterans Memorial and is composed of 74 separate frames, with 70 frames containing two silk-screened panels. The tallest panels are six feet high and have 137 lines of names.

The panels are made from aluminum and have a glossy black mirror-like finish. Devitt borrowed the negativies of the original stencils from the wall in Washington D.C. to create silk-screening of all the names and continues to silk-screen any damaged panels.

The panels taper down with the shortest panels at each end having only one line. Symbolically, it is described as a “wound that is closed and healing.”

The Moving Wall contains the names of American casualties that occurred between 1958 and 1975 and is a replica of Maya Lin’s designed memorial in Washington D.C. Lin’s vision was controversial with its lack of ornamentation, stark black color and unique design. Several supporters withdrew from the project initially, but most have come to see the memorial as a beloved shrine.

The Moving Wall was first displayed in Texas as part of the Tyler Rose Festival and has since been seen by millions of people with many leaving behind mementos similar to what happens at the original wall.

The popularity of The Moving Wall pushed Devitt and his crew to create two walls that now travel the country from April to November. The wall typically stays about a week at each location.

Devitt does not charge admission, believing everyone should be able to see the wall, but seeks hosts to help cover the expenses involved with the travelling and set up. He said The Moving Wall is not a commercial endeavor and the memorial speaks for itself.

“It’s a solemn affair, it’s not a celebration,” Moore said.

Moore said the city is sponsoring the event as a 501c3 organization, but is not contributing any funds. He said contributions are still being taken and can be donated through the city of Williams. The cost to bring The Moving Wall to Williams is $6,000.

“Once I was able to get it to come here, I realized we need to get a sponsor,” Moore said. “The city is going to be the sponsor, but it’s all paid for by private money.”

The conflict went back many years, with the most recent being the First Indochina War between the communist North and the French-backed South, and the subsequent splitting of Vietnam into North and South.

The United States became involved in the political situation in Vietnam because of the perceived growing threat of global communism. Leaders of the free world feared a “domino effect” regarding the spread of communism. They believed that if communism took root in one country, it would soon spread to others such as the neighboring nations of Laos, Cambodia, and Thailand.

The Vietnam War was the most unpopular war in United States history. Its unpopularity helped to shape the turbulent social movements of the 1960s and led to deep divisions within the nation. The bitter controversy surrounding the Vietnam War led many soldiers to feel unwelcome when returning home.

The Moving Wall will be in Williams June 4-8 and will be on display at Glassburn Park near the railroad boxcar bridge on Railroad Avenue.