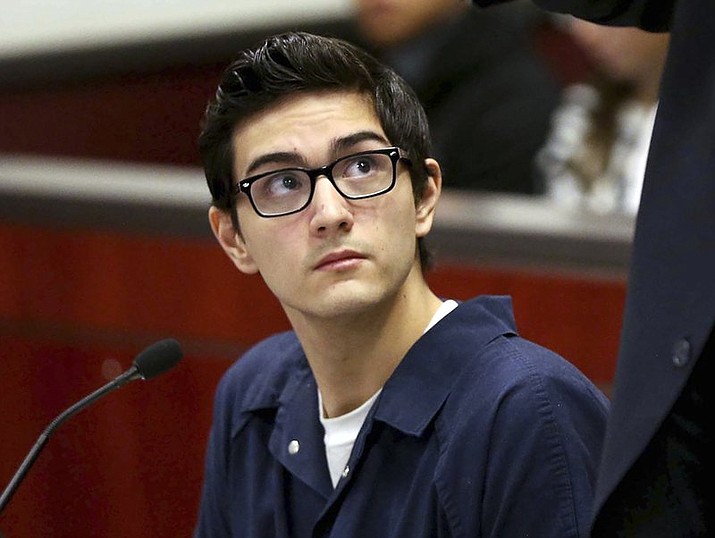 FILE - In this Feb. 19, 2016 file photo, Steven Jones is shown during a bail modification hearing in Coconino County Superior Court in Flagstaff, Ariz. Two attorneys representing Jones, the former Northern Arizona University student charged in a fatal shooting on the school's campus, have asked to withdraw from the case. The request comes after a state Supreme Court committee admonished Ryan Stevens and Bruce Griffen for once representing one of the shooting victims and now representing the accused shooter. The committee says it found probable cause that the attorneys violated rules of professional conduct. (Jake Bacon/Arizona Daily Sun via AP, File)

FLAGSTAFF, Ariz. (AP) — A former Northern Arizona University student charged in a fatal shooting on campus is scheduled to change his plea at a court hearing Thursday.

Steven Jones' second trial on second-degree murder and aggravated assault charges was scheduled to begin later this month. The hearing likely will make that moot, though it's unclear what plea Jones will enter.

Jones, 23, has acknowledged firing the shots that killed Colin Brough, 20, in October 2015 and injuring three other students. But he claims he acted in self-defense after being bullied and attacked both verbally and physically, saying he feared for his life.

The shooting initially stoked fears of a mass shooting at the school in Flagstaff, about 145 miles (233 kilometers) north of Phoenix, that has more than 25,000 students.

Prosecutors had painted Jones as an assassin whose pride was hurt after he was punched in the face outside an apartment complex where one of his friends rang a doorbell and ran off.

Jones could have left the scene of what largely was a verbal altercation, prosecutors said, but instead went to his car, got a loaded .40-caliber handgun from his glove box and shot four unarmed students on the campus.

A jury in Jones' first trial deadlocked on the charges.