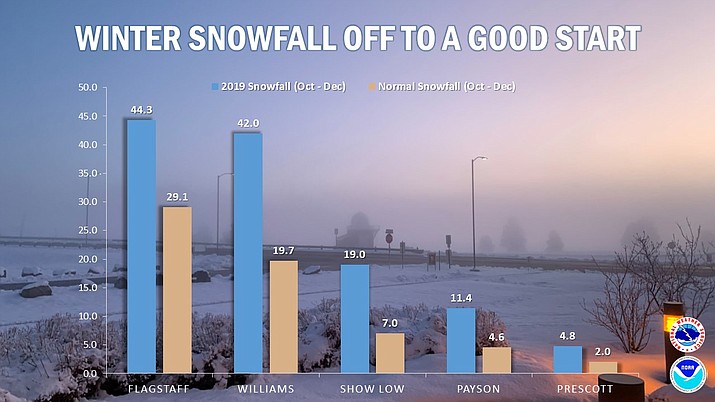 WILLIAMS, Ariz. — A dry cold front brought a drop in temperatures this week while breezy northerly winds have continued to make it feel even colder outside.

The National Weather Service in Flagstaff is predicting no big storm systems this week but cool conditions and a chance for some light showers by Jan. 9, with another system moving into the area over the weekend.

With continued cold and wet conditions, the NWS has stated that winter is off to a good start in northern Arizona. According to a recent NWS graph, snowfall in Williams between October through December reached 42 inches. Average snowfall within those months is normally 19.7 inches. Flagstaff reached 44.3 inches of snow between October-December and Prescott received 4.8 inches of snow.

Despite these totals, the Southwestern U.S. is still considered to be in a drought. According to a recent report in an AP story, federal maps show that a pocket of moderate and severe drought is centered over the Four Corners region — where Arizona, New Mexico, Colorado and Utah meet.

Despite the continued dry conditions, forecasters say things are better than they were last year at this time when exceptional and extreme drought — the worst categories — had set in. Over the last three months, parts of southern Arizona and New Mexico recovered but portions of Utah and Colorado dried out.

Overall, officials say average moisture levels resulting from snowfall are above normal across Arizona, New Mexico and Utah despite precipitation deficits that have accumulated over the last six months.

The Associated Press contributed to this story.

Dec. 31, 5 p.m. update: Winter storm to bring snow and cold temps to Williams, Grand Canyon
Is the drought over? El Niño delivers wetter than average conditions to the southwest
Heavy snow is on the way for Williams and Flagstaff
3-5 inches of snow expected for Williams
Over 30 inches in a single week