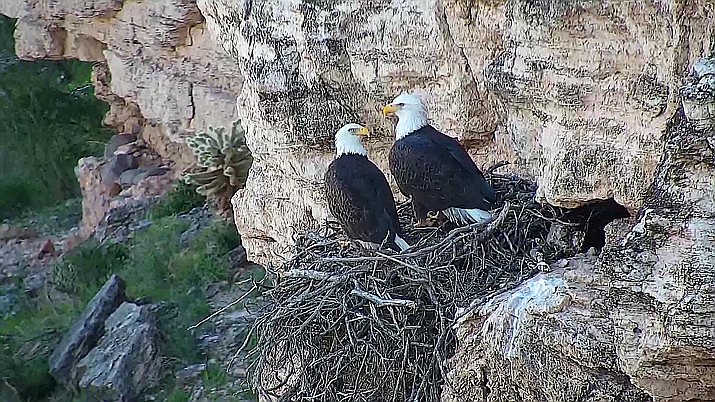 The bland nesting eagles, who keep their nest on the side of a sheer cliff above Lake Pleasant, attracted nearly 400,000 views in 2019. (Photo/AZGFD)

PHOENIX — The nest is primed and a live-streaming camera is already broadcasting the day-to-day life of a pair of bald eagles hoping to raise a family inside their Lake Pleasant Regional Park nest.

Nearly 400,000 viewers tuned in for the inaugural season to watch the unfiltered drama that transpired earlier this year. They saw competing male bald eagles repeatedly divebomb each other for territory, and watched as a total of four eggs were laid in two separate clutches that were later scavenged by ravens and a ringtail.

So what’s in store for season two?

“Some nestlings, we hope!” said Jeff Meyers, Arizona Game and Fish Department Watchable Wildlife program manager. “Despite lacking young last season, the bald eagle camera was a huge success because viewers saw the real-life struggles of nature. That struggle is real, and through these cameras, the public can gain a new appreciation for our fascinating wildlife.”

The bald eagle cam is one of four wildlife cameras offered by the department, which also provides seasonal views of wintering sandhill cranes in southeastern Arizona, a bat roost at Cluff Ranch Wildlife Area and an underwater pupfish cam. A fifth — a camera placed near a great horned owl nest — is on the horizon and will join the other streaming feeds later at www.azgfd.gov/livecams.

The public is invited to check the cameras often if there is no activity in the nest as the birds will leave at multiple times for feeding. If eggs are laid, the viewing will be more consistent and predictable.

Records show bald eagles inhabited nests at Lake Pleasant since at least 1979, with the first documented nesting attempt occurring in 1984. While no young were produced until 1993, 28 birds have since survived to take their first flight, known as fledging.

Statewide there are a record 74 breeding areas, which helped to produce 99 eggs and 72 eagle nestlings, with 65 birds fledging the nest, according to AZGFD’s 2019 annual survey.

More information about what AZGFD does to manage the state’s 800-plus native species, including bald eagles, visit www.azgfd.gov. Those wanting to support AZGFD’s mission to conserve and protect Arizona’s wildlife can sign up for a Conservation Membership package at www.azwildlifehero.com.