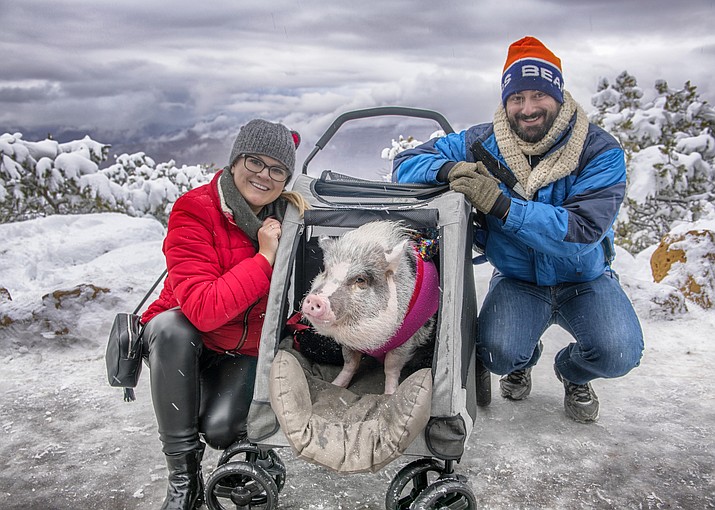 GRAND CANYON, Ariz. — LiLou, an internationally famous therapy pig, made her debut at the Grand Canyon Dec. 27 attracting friendly smiles and coddles from visitors along the rim.

Known as the world’s first airport therapy pig, LiLou is known around the globe and has been seen on shows such as The Today Show, Good Morning America, CBS and Fox News as well as featured in newspapers and radio stations.

“LiLou has 26,000 followers on Instagram,” said LiLou’s owner, Tatiana Danilova. “You can read all about her life, family life, adventures and volunteer work in the community."

Living the California dream, LiLou, who is five years old, resides in San Francisco where she takes daily walks with her owner. This is how LiLou’s entry into therapy began.

“I noticed that the reactions with people brought joy to LiLou,” Danilova said. “As a result we completed training and became the first certified therapy pig.” 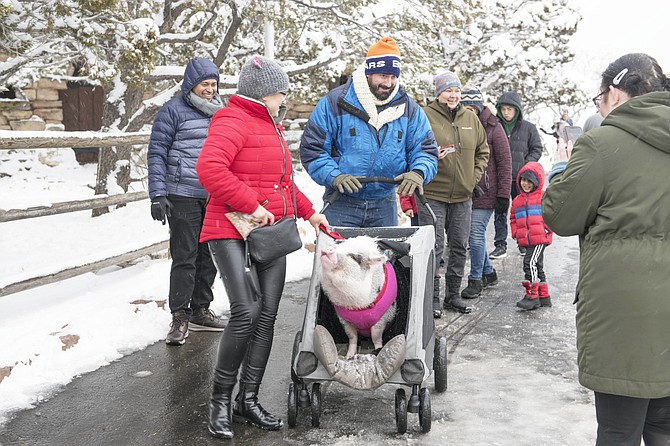 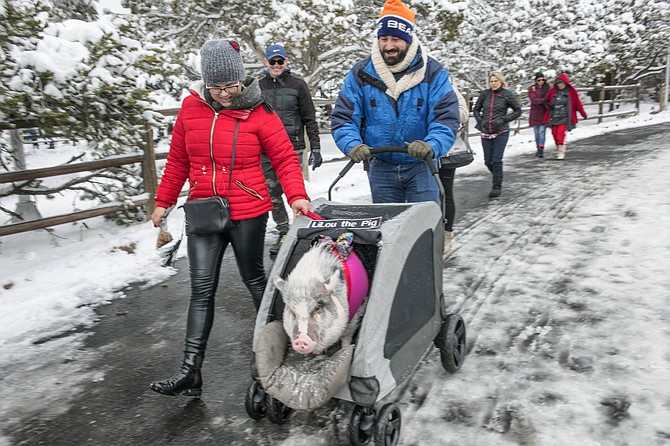 “My friends came to visit me here at the Grand Canyon with their pet pig,” said Shannon L. Haske, Transportation Administrative Assistant for Xanterra Grand Canyon South Rim. “I’ve never met a pet pig in my life, but heard they make great pets. LiLou is just like any other living being – cautious upon meeting new people and gentle. I think the best thing about her is that she’s a therapy pig and serves a big part of her life helping others feel better. The fact that she is litter-trained was pretty amazing to me.”

Visiting the Grand Canyon was a bit cold and slippery for LiLou but she was kept warm with plush blankets inside her stroller.

“Pigs have intelligence of a three-year-old human child,” Danilova claims. “They are clean and very smart. While making wonderful pets, they are a lot more work than dogs. It’s like having a cat plus a dog and a three-year-old toddler in one package. Research is essential.”

Danilova said LiLou is a Juliana breed within the mini pig category. She is full-grown, and weighs 130 pounds.

“There is no such thing as “teacup” or “micro” pigs —these are just babies and some unethical breeders use this scam to make money,” Danilova said. “Pigs reach full size at five years of age. There are “mini” pigs but this is a broad category for all pig breeds that are smaller than a farm pig,” she said.

Danilova said they would love to come back in the spring or fall to explore more of the Canyon area. Next on LiLou’s itinerary is a trip to Tucson and Los Angeles before returning to San Francisco.