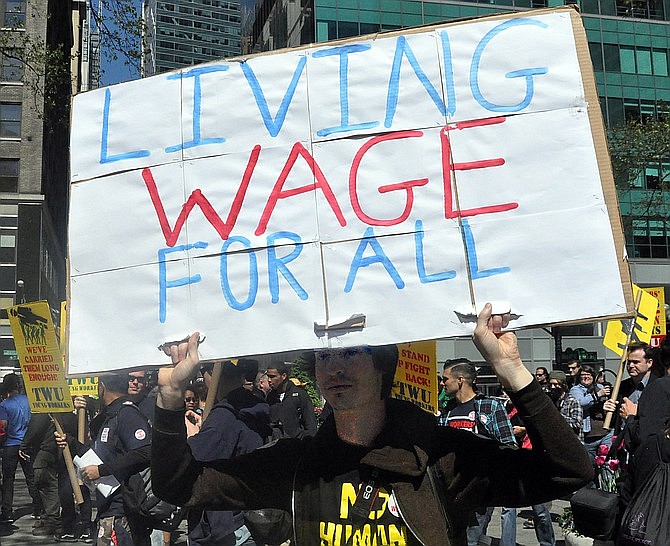 Arizona’s $12-an-hour minimum wage as of Jan. 1, 2020, is one of the highest in the country , but still well shy of the $15-an-hour “living wage” that some advocates are pushing for, as in this 2013 file photo from New York. Business officials call mandated minimums counter-productive. (Photo by Michael Fleshman)

PHOENIX — Arizona’s minimum wage rises from $11 to $12 an hour on New Year’s Day, a move advocates said is “long overdue” but also a long way from solving the state’s poverty issues.

The automatic increase will give Arizona one of the highest minimum wages in the country. But advocates say that even at the higher wage, basic housing and other necessities may still be out of reach for most of the state’s working poor, who have to cobble together jobs to try to make ends meet.

“There’s a lot of part-time jobs out there, a lot of gig opportunities,” said Jeff Grobe, executive director of the Coyote TaskForce, a Tucson nonprofit that helps find work for people recovering from mental illness. “People aren’t working as much as they want to. They are not able to meet their basic living needs.

“An increase for the individuals that we serve is absolutely necessary, probably long overdue,” Grobe said, even though he does not believe it is sufficient.

But business officials said the higher minimum wage will only make jobs more scarce, as businesses cut back on hiring to protect their bottom lines. They questioned the need for a mandated wage increase at a time when the economy is strong.

“To have nonmarket forces pushing wages up, I don’t think it is ever healthy, in any economy,” said Steve Chucri, president and CEO of the Arizona Restaurant Association. “You cannot dictate a wage as resolution to someone being impoverished or not.”

To Arizona Chamber of Commerce spokesman Garrick Taylor, “the best path out of poverty is a job,” but he believes the higher minimum wage will make it harder for people to follow that path.

“For those who are looking for a job, hiring is more expensive beginning January 2020 then it was just the month prior,” Taylor said Tuesday.

Arizona regularly has a higher percentage of people living in poverty than the national average: In 2018, according to the Census Bureau, 14 percent of people in Arizona were living below the poverty level, compared to 11.8 percent nationally. In 2017, the last year for which county numbers are available, the poverty rate in the state ranged from 12.6 percent in Pinal County to 33.6 percent in Apache County, according to the Census.

The National Low Income Housing Coalition’s annual “Out of Reach” report, which compares the cost of housing across the country to incomes, said that a worker in Arizona would need to make $19.52 an hour to afford a two-bedroom home in the state in 2019. For the same house, a worker would have had to put in 71 hours a week at the 2019 minimum wage of $11 an hour, the report said.

The new minimum wage is the latest in a string of automatic increases approved by voters in 2016 under Proposition 206. It would lift some workers out of poverty, but not all.

“A full-time worker earning $12/hour earns nearly double the federal poverty line, which is great, unless that person is the sole earner for a family of three – a single parent with two kids,” said Ashley St. Thomas, public policy manager at the Arizona Food Bank Network, in a prepared statement.

Full-time workers at minimum wage would see their annual gross pay rise from $22,880 to $24,960 at the new pay rate, if they worked all 52 weeks in 2020. That would be just under twice the federal poverty level for a single person in 2019 – but still below the $25,750 income that was the poverty threshold for a family of four.

The higher wage is a “step toward shortening the line” at the state’s food banks and it “eliminates the need for many parents to skip meals in order to feed their kids” – but families will still struggle, St. Thomas said.

One problem, said William Spriggs, chief economist for the AFL-CIO, is not the availability of work but the type of work.

“Today, we almost have as many fast-food workers as manufacturing workers in the United States,” said Spriggs, who is also a Howard University economics professor. Until states set a living wage of $15 an hour, he said, states will just end up subsidizing their working poor.

But Chucri said the problem of poverty cannot be legislated away.

“Yes, I know a $12 an hour wage for a single, one-income family is going to be very challenging, but it was never really intended to be a stopgap measure for poverty,” Chucri said.

He said his association members represent “an industry of opportunity,” where people who started in minimum-wage jobs “are owning restaurants now.”

Taylor said that besides cutting down on hiring, the higher minimum wage could also result in higher costs being passed on to consumers in businesses that have that flexibility.

“They can pass those higher costs on to consumers in the form of higher prices,” Taylor said. “They can cut hours for existing employees, or they can close or cease hiring altogether.”

In addition to being an advocate, Grobe is also a business owner, who will be hit with the higher cost of paying his workers like every other business in the state.

“Our payroll costs go up,” he said. “Organizations like ours are not able to pass that cost on to consumers.”

But he said that cost is worth it in the long run.

“I’d love to see this continually go up and try to hit a benchmark at $15 or something like that,” Grobe said.