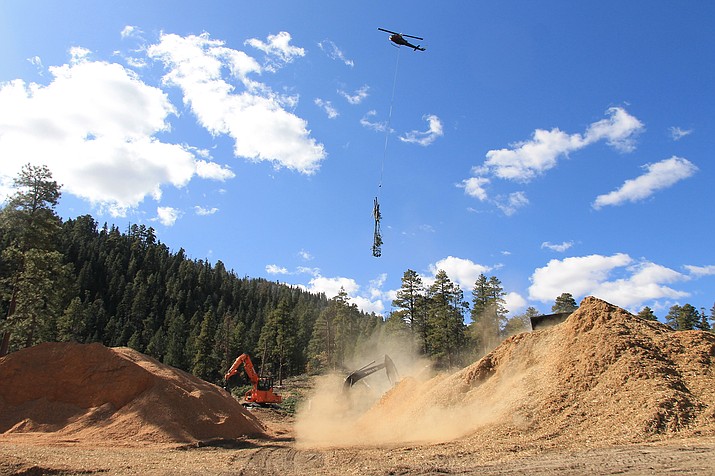 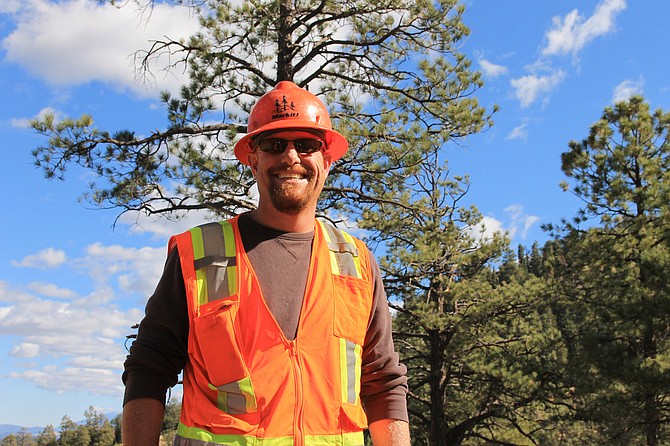 “Whenever we engage in high elevation operations at this time of year, we know there is always a potential for this to happen,” said Markit! Forestry regional operations manager Bryan Zebrowski. “Access on the mountain is quite difficult after storms of this extent and can make using aircraft problematic until snow levels diminish.”

A helicopter had been working steadily for several weeks hauling woody material off the steep slopes on the north face of Bill Williams Mountain. Bundled material on the ground is tethered to a long cable below the helicopter and then flown to a lower elevation where it is processed and eventually transported off the mountain by trucks.

The cutting of trees on the first 300-acre unit of the 1,200-acre steep slope area has been completed, and more than 85 acres of that have been cleared using the helicopter to extract the woody material. The debris being removed is largely made up of dead and down trees that could fuel high-intensity wildfire in the most sensitive drainages of the watershed on the highest slopes.

Conditions on the mountain will be evaluated weekly to determine when it is safe to continue with aerial operations. The removal of material by truck hauling may continue if road surfaces can be cleared and weather conditions allow for safe ground travel.

The Temporary Area Closure will remain in effect while the project is active. Detailed information about the closure is available at http://bit.ly/BillWmMtn-TempClosure.

A collaborative partnership between the National Forest Foundation, Coconino County, Arizona Department of Forestry and Fire Management and Kaibab National Forest was formed to implement this project, which will provide better protection from high-intensity wildfire as well as improving long-term sustainability of critical resources that are vital to the city of Williams and many communities to the south.

This initial stage of steep slope fuels removal is the first of several steep slope projects that will be ongoing over the next several years. Other restoration work including hand thinning, timber sale contracts and piling of downed debris will also continue on the lower, more accessible slopes of the mountain and around its base.

Members of the multi-agency partnership hope to secure necessary funding to continue this critical work, which Coconino County officials have identified as a top priority for restoration.