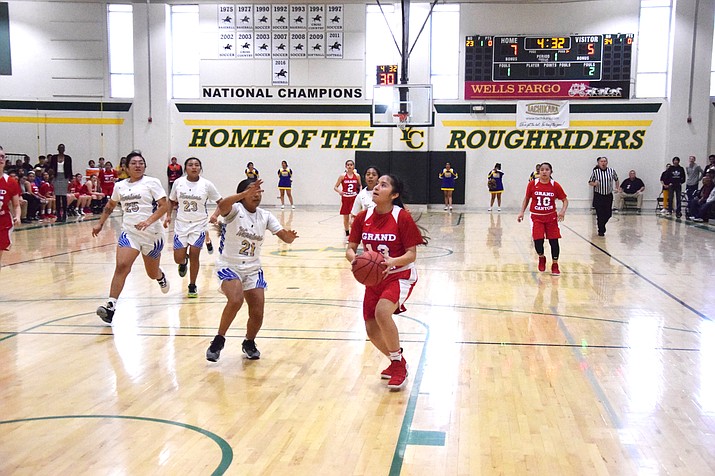 GRAND CANYON, Ariz. — The Grand Canyon Phantoms girls basketball team caused a major upset at the 1A State Championship tournament at Finlay Toyota Center in Prescott Valley Feb. 20 when they knocked out No. 1 St. David in a quarterfinal game.

The team was eventually beat by Baboquivari in the state semifinal game. Baboquivari went on to lose to Rock Point in the title game.

“We went into it fighting to win. We didn’t end up getting that win, but I couldn’t be prouder of our team. We worked hard all season and we surprised a lot of people this season I think,” Phantoms Head Coach Catheryn Redmon.

The No. 10 Phantoms (18-9, 5-5) had a stellar season going 18-9, 5-5 ranked third in the 1A Central Region. The semifinal game marked the first showing for any Phantom’s girls basketball team in history.

In addition to the St. David win, the Phantoms surprised No. 7 St. Michael in their state play-in game, toppling the Cardinals 41-36. 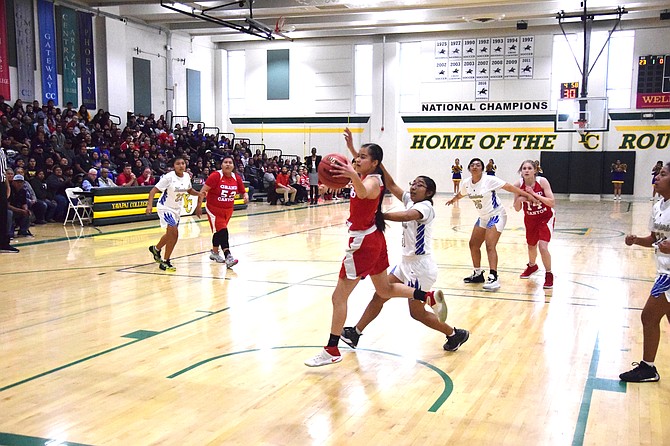 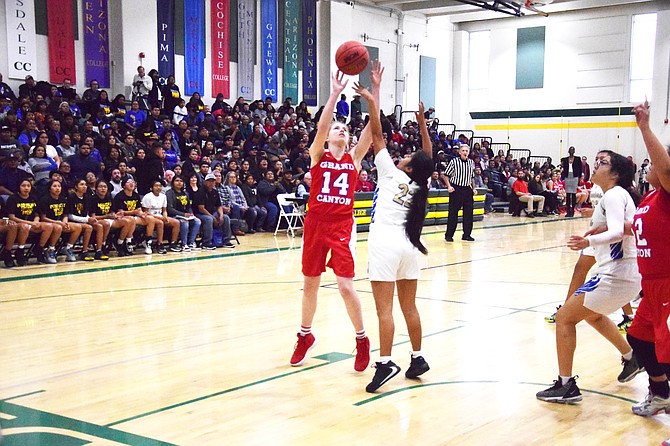 “We had been working hard all season and we knew it was within our ability to beat them,” said Phantoms Head Coach Catheryn Redmon about the quarterfinal game. “Our confidence was really high going into that game.”

The Phantoms got on the boards early against St. David, and kept the lead throughout the game.

“Their confidence grew as the game went on and we just played so well,” she said. “That was our best game of the year.”

Redmon said despite not seeing any game film or facing St. David in the regular season the girls were prepared for the game.

“I had them focus on us and work a lot on our defense,” she said about the preparation for the tournament. “I think it really paid off. I had them get off several hundred shots in the week before the game.”

Redmon said the win can be attributed to contributions from several of the players.

Throughout the season, the Phantoms have been led by sharp shooters Savannah Longhoma and Cayli Miles.

Longhoma went 9 for 16 in two-point field goals, 2 for 9 in 3-point shots and 1 for 2 in free throws. She brought in six rebounds, caused five turnovers, and had eight assists and nine steals.

Miles went 5 for 6 in 3-point shots, 1 for 4 in two-point field goals, and went 1 for 2 in free throws. She made five rebounds, four turnovers, and had seven assists and six steals.

“We have some good scorers on our team,” she said.

Redmon said the girls were nervous prior to the game, but that was expected.

“I told them once that ball goes up, you’ve got to focus on the game. There’s not time to be nervous anymore,” she said.

Redmon said the state tournament games were the first time the Phantoms had played in such a large venue.

“It was new to us – the big open space, the big arena,” she said. “They were nervous about the change and the environment, but they rose to the challenge very well.”

With two games in large venues, the Phantoms went into the semifinal game against Baboquivari with confidence.

“We went into it fighting to win,” Redmon said. “We didn’t end up getting that win, but I couldn’t be prouder of our team. We worked hard all season and we surprised a lot of people this season I think.”

Longhoma made 20 points against Baboquivari, and Miles added seven. Jasmine Longhoma and Alana Keebahe contributed six and seven to the total.

“Part of it is the quick turn-around in games,” she said. “You get beat up yesterday and then you have to come back and play the next day.”

She said the girls also struggled to keep their energy up after several games.

“You get banged up and it takes a lot out of a person,” she said.

However, Redmon said the girls still played hard and it was emotional for the seniors playing their last game.

“We played hard, but we just didn’t get it,” she said.

Miles averaged 17.4 points per game during the season. Her season high 31 points came against Williams Jan. 24.

She went 9 for 16 in two-point field goals, 2 for 9 in 3-point shots and 1 for 2 in free throws. She brought in six rebounds, caused five turnovers, and had eight assists and nine steals.

Redmon said she hopes to have a repeat season next year and go even further in the state tournament.

“I think a big goal for next season is having a better regular season,” she said. “There were several games I felt like we could have pulled out and won. Now that we have the experience from this year, going into next year is going to be a different mindset.”