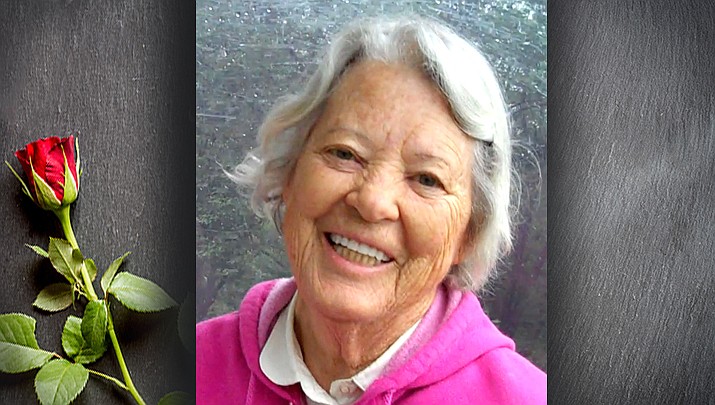 She was born October 12, 1930, in Medford, Massachusetts, the daughter of Earl and Marjorie Goudey. She was a graduate of the University of Arizona (BA) and Arizona State University (MEd).

She married William (Bill) Smykal in 1953 in Phoenix, Arizona. He predeceased her in 1975. Joyce started her career as an elementary teacher in the Phoenix area. It was during this time that she had two children, Theodore H. Smykal and Margaret L. Smykal.

Later Joyce moved to Vermont where she taught art for grades 1-12. Thereafter, she moved between a number of different jobs throughout the country including teaching ceramics, jewelry making, and painting.

In 1986, Joyce met her kindred spirit in William Lee “Trapper” Beachman, and they remained together until his passing in 2009. They eventually moved to Ash Fork, Arizona where they lived for 20 years.

During that time Joyce taught painting at Coconino College, worked as a librarian in Ash Fork, and volunteered with the local historical center. Upon Trapper’s passing she decided to move to Northfield, Vermont to be closer to family.

In Northfield she worked as a librarian. She also participated in the ladies reading circle and was an active supporter of the Paine Mountain Art Council.

A memorial service will be held on May 16 at the Kingston Funeral Home in Northfield with calling hours at 1 p.m. and the service at 2 p.m. Joyce was a lifelong animal lover and requested that in lieu of flowers, donations be made in her memory to Reservation Animal Rescue or Central Vermont Humane Society.