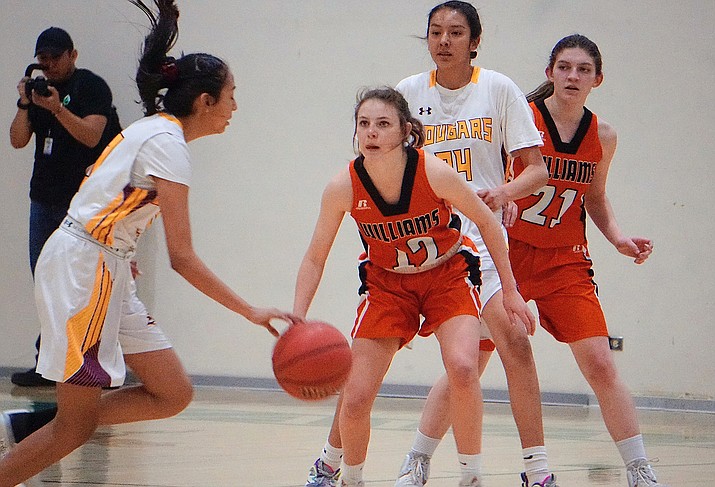 Maegan Ford guards a Rock Point player in a quarterfinal game at the 1A State tournament at Yavapai College Feb. 20. (Aaron Valdez/Daily Courier)

WILLIAMs, Ariz. — The 2019-2020 Williams Vikings girls basketball team closed out the season with a tough 64-42 loss to Rock Point at the quarterfinals of the 1A State tournament in Prescott Feb. 20.

Rock Point went on to win the state title, a first for the team.

“I think it was a disappointing end to a fantastic season,” said Vikings Head Coach Phillip Echeverria. 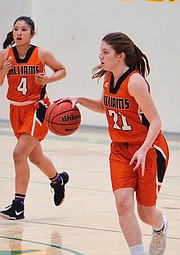 Shaelee Echeverria heads down court during the 1A State quarterfinal game with Rock Point. Feb. 21. (Aaron Valdez/Special to WGCN)

Echeverria said the first-round win against Valley Union was the farthest the Vikings have made it in the state tournament since about 2008.

“So its probably been a good 10 years since we’ve won a playoff game,” he said.

Echeverria said the Vikings struggled in the first quarter against Rock Point. They were outscored 19-2.

“We were dominated by them in the first quarter,” he said. “We only took six to eight shots that first quarter.”

He said he was proud of the girls when they returned in the second quarter.

“We fought our way back into the game where we scored 18 points and gave up 13,” he said.

The Vikings trailed by 12 at half-time.

Echeverria said the Vikings struggled again in the third quarter, scoring just four points and giving up 20 to the Cougars.

“Our girls never quit though, they never gave up,” he said.

The Vikings powered through again in the fourth quarter outscoring Rock Point 18 to 20, but it wasn’t enough.

Echeverria said the team had a goal of scoring 15 points per quarter throughout the season.

“If you look at that, we are right in the ball game,” he said. “But scoring just six points in two quarters takes you out.”

Echeverria said Rock Point has a strong team with a tough defense.

“You’ve got to give credit to them,” he said. “They have an outstanding team, and their defense — the couple zones they played — they were able to pressure us quite hard.”

Echeverria said he has watched the 2019-20 team develop since he became head coach three years ago.

He said the team has faced Rock Point four times in the past four years.

“We have lost by 18-20 points every time, and haven’t been able to play at their level but we are working toward that,” he said.

Echeverria said he hopes to continue building on the girls program in Williams.

“I think the girls realize if they want to compete at the state level, they can’t just play during the season,” he said. “They need to play in the summer and on their own, picking up games whenever we can.”

“I’m really, really impressed with how these seniors came along these last three years,” he said. “And also juniors, sophomores and freshman. We have a lot to look forward too.”

Maegan Ford led the scoring for the Vikings with 21 points. She was followed by Sydnee Morteesen with 10, and Aliyah Alvarado with nine.