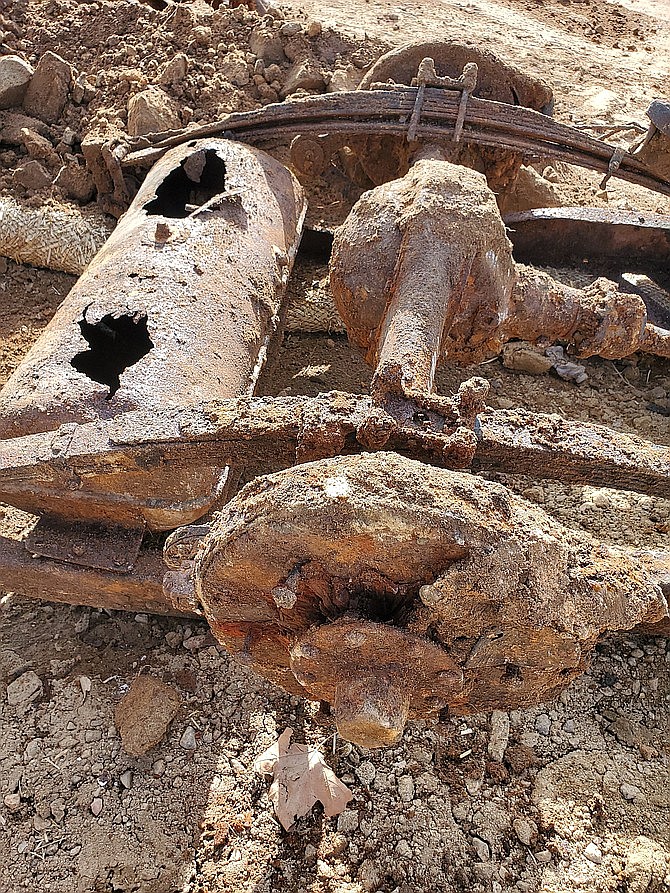 An excavator dug up the remains of an old vehicle buried under Goodwin Street. (Robert King/Courtesy)

To the surprise of many, some very unusual items were unearthed during construction along Goodwin Street in Prescott this week.

As an excavator was digging a few feet down to make space for a 16-inch water main in the middle of the roadway, rusted metal started to appear.

When workers took a closer look, they realized they had just struck the remains of an old vehicle.

“I’ve been doing this for 50 years and I’ve never hit a car,” said Robert King, a senior field technician with Ninyo & Moore, a geotechnical and environmental science consultant firm based in Prescott Valley. “I mean, what was it doing there in the city street?”

While it wasn’t perfectly preserved, some large parts of the vehicle were intact, including the undercarriage.

“You could see the gas tank and the rear end and the front axle, that kind of stuff,” said David Bradley, the capital projects manager with the City of Prescott. “As far as what it is, there wasn’t enough there for me to tell.”

King thinks it was a Ford Model T or Model A based on the weight of the suspension, but nothing was found to confirm that.

“I wish there’d been a license plate,” King said.

Recovered near the vehicle was a broken dinner plate that provides a little historical context. According to ThePotteries.org, the mark on the plate indicates that it was made between 1890 and 1907. 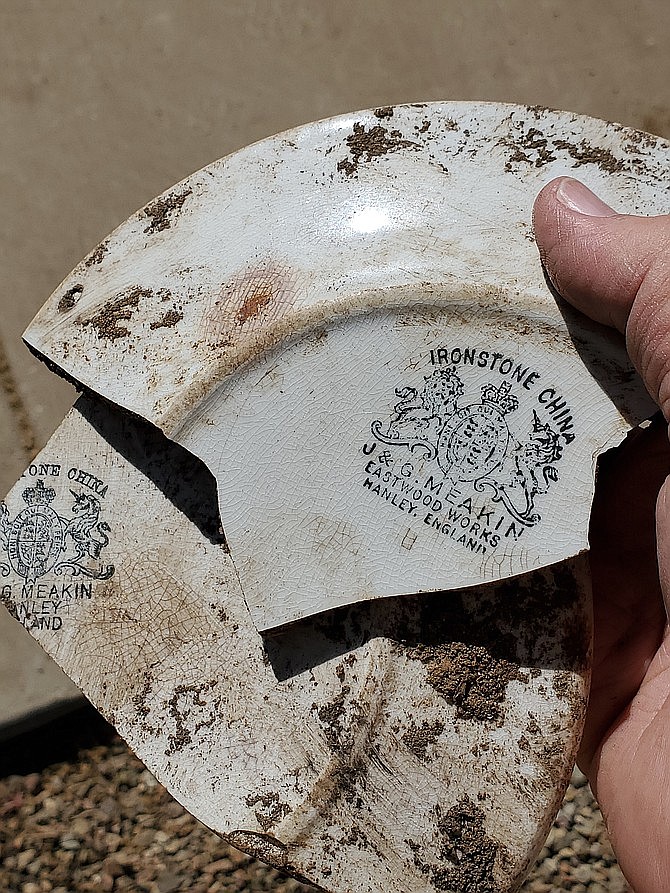 A dinner plate that dates back to between 1890 and 1907. The dishware was unearthed during construction along Goodwin Street on Monday, Feb. 17, 2020. (Robert King/Courtesy)

The first production Model T was completed in 1908.

Additionally, when the improvement project was being considered for Goodwin, Summit, McCormick and Beach streets, there was some attention brought to the age of some of the roadways.

Specifically, a concrete stamp along Summit Avenue near its intersection with Gurley Street indicates that the concrete was poured in 1938 as part of the Great Depression-era Works Progress Administration (WPA).

Part of Goodwin Street may have been worked on during that WPA project, but Bradley said the stretch of road they’re working on has been noticeably improved since then.

“It was all asphalt rather than the concrete you typically see with a WPA project,” he said.

On Tuesday, another old vehicle was found along the same stretch of Goodwin Street. This time it was an old pickup truck.

And then on Wednesday, some bones were found.

A dinner plate that dates back to between 1890 and 1907. The dishware was unearthed during construction along Goodwin Street on Monday, Feb. 17, 2020. (Robert King/Courtesy)

Bradley said the bones appeared to be from an animal — perhaps a cow — especially since one of them had been clearly cut with a saw. Had he believed the bones to be human, then the construction would have been halted for further investigation.

“If there were any thought at all that it was human remains in there —prehistoric or more recent — we would have stopped the project and gotten somebody out there to identify them,” Bradley said.

One can only speculate, but project managers believe the items were simply used as fill at a time when dumping odds and ends into a pit and then constructing over it was considered acceptable.

“So if they wanted to build it up, whatever was around at the time they would have used,” said Derek Cack, a project manager with Fann Contracting, the company working the project for the City of Prescott.

Bradley assumes the same, but is a little baffled about the old vehicles.

“I don’t know why they would use a car for [fill],” he said. “The rest of it is probably just an old garbage pit of some kind.”

When excavated items are classified as “garbage,” construction crews are usually instructed to dispose of it. While the vehicles were unusual finds, they met this fate.

“If it’s just chunk for fill, we just discard it,” Cack said.

As it stands, the construction work for the improvement project is expected to be complete by the 4th of July, Bradley said.