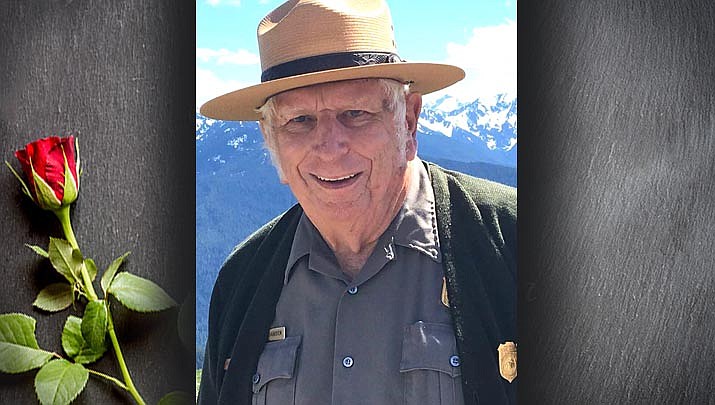 Francis Lynn Bawden passed away surrounded by family, due to natural causes, on Feb. 2, 2020, in Port Angeles, Washington, a few days shy of his 87th birthday.

Lynn and his late sister, Barbara, were born to the late Francis Richard and Fay Leslie (Lerch) Bawden in Oakland, California, where he was an accomplished athlete in high school, lettering in both track and football.

His love for nature was ignited when he was introduced to Yosemite National Park by his parents in the mid-1940s on a camping trip, and this began his lifelong passion. His first job out of high school was in Yosemite and with the exception of his time serving in the U.S. Coast Guard, he spent most of his life working for the National Park Service. He called many scenic places home including Yosemite, Sequoia and Kings Canyon, Grand Canyon, North Cascades and finally, Olympic National Park, where he greeted everyone with a smile and a story at the Elwha Valley entrance station until two years ago.

He also loved the beauty of the Eastern Sierra Nevada where he was a deputy sheriff in Lake Tahoe, Virginia City and Carson City. He was recognized for developing the “Officer Bill” program that promoted K-12 safety education, as well as his defensive driving courses for fellow officers and drivers in the communities that he served.

His years in Yosemite were a very memorable time in his life, and included leading tours to the top of Half Dome 52 times as a guide, having the privilege of pushing the embers off of Glacier Point as part of The Yosemite Firefall, spending weeks in the backcountry as a member of a helicopter hotspot firefighter crew, and ensuring that park visitors enjoyed their stay. His one-time neighbors in Yosemite were Ansel and Virginia Adams, who sponsored him into the Sierra Club and helped kindle his love for photography, which became his cherished passion later in life. He took every opportunity to take photographs of nature, vintage cars, trains, wildlife and the changing autumn colors.

Lynn’s family was very important to him and he would often say how much he “loved all of his kids”. He is survived by his wife Elaine, married 53 years and eight children: Larry, Brad, Doug, Nathan, Deena, Gerald, Larry Lynn and Shallon. He has 18 grandchildren and 13 great-grandchildren. Words cannot describe how much he will be missed by family and friends.

A private memorial service is being planned.