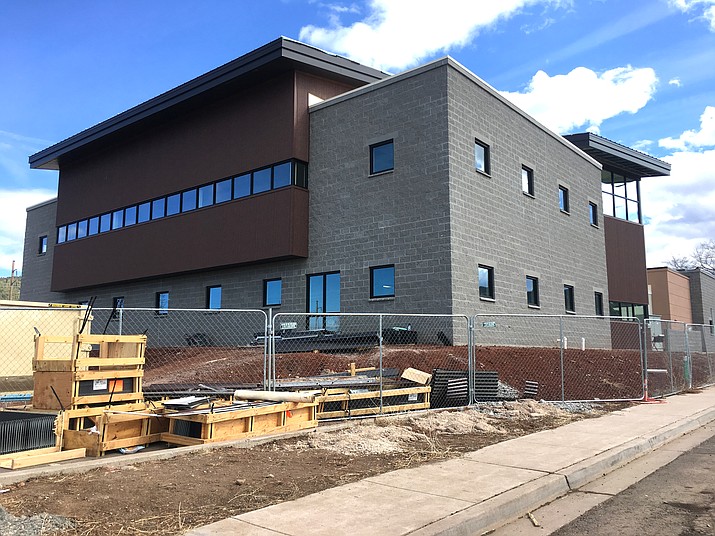 North Country HealthCare in Williams is on track to begin moving into its new facility April 8. (Katherine Locke/WGCN)

WILLIAMS, Ariz. — The new Williams health clinic is getting closer to completion, with a tentative move-in date set for April 8.

North Country HealthCare (NCHC), the contracted provider for the medical clinic, will begin moving equipment to the new facility April 5-8, according to Williams Hospital District Board President George Glen.

Glen said the date is tentative based on weather and approval by the Arizona Department of Health.

“We are moving along very nicely,” Glen said.

The clinic has four new health care providers who have already begun practicing at the old clinic, and will transition to the new clinic in April.

Glen said patients could see some disruption from now until the opening.“It’s going to be piece meal before the opening,” he said. “Certain practitioners will use certain primary care offices, physical therapy will move when it’s ready and so on.”

Glen emphasized that although there will be disruptions, the clinic will continue operations throughout the transition.

“There will be no loss of urgent care — that will go completely to the last minute,” he said. “They will pick up their doctor’s bag and walk across to the new structure.”

Glen said once the transition is complete, there will still be work to do at the site.

“We will need to remove the asbestos from the existing building and then begin demolition,” he said.

Glen said patients can expect limited access to the buildings during this time and while exterior finishes are completed.

“North Country will be shuttling patients in side doors, back doors, however we can get them into the building while the exterior is being done,” he said.

Glen said the final phase of the building project includes completion of the parking lot and landscaping.

“We are on the road to completion,” he said.

The city of Williams received the new health clinic because of a $6 million grant from Northern Arizona HealthCare Foundation.

The Williams Hospital District Governing Board has worked to find financial backing to replace the existing clinic that was built in the 1950s.

The governing board continued their agreement with North Country HealthCare to provide services at the new clinic.

The Williams Hospital District sought input from NCHC on the construction and design of the new building.

NCHC operates in 14 communities in northern Arizona. NCHC is a federally qualified community health center with 23 medical offices. The organization not only provides medical care for community members but also has educational training programs for students studying to be doctors, family nurse practitioners, nursing students and dentists.