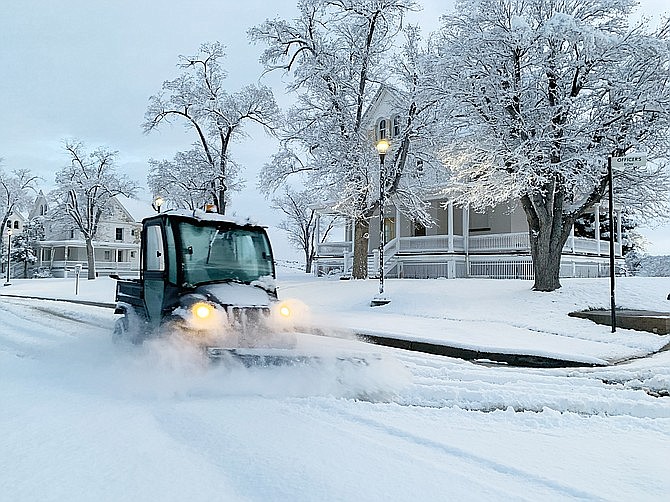 A snowplow in the Veterans Affairs housing area takes care of the street for the residents on Tuesday, Feb. 11, 2020. (Aaron Ricca/Courtesy)

In what was a bit of a surprise, the Prescott area received quite a bit of snow Tuesday morning, Feb. 11.

The weather forecast from the National Weather Service office near Flagstaff Monday morning indicated there was only a 25% chance of the area receiving 1 to 3 inches of snow accumulation over the next 48 hours. And much of that was expected to only reach elevations of 6,000 feet or more.

But many in the Quad Cities woke up Tuesday to find several inches of powder covering the ground, stacked on cars and weighing down tree branches.

By the time the snow tapered off in the late morning, weather spotters reported between 4 and 8 inches of snow in Prescott and Prescott Valley.

“The moisture stayed a bit south of Flagstaff and the Prescott area got hit a bit harder,” said Ken Daniel, a meteorologist with the National Weather Service near Flagstaff.

Even Chino Valley, with its elevation of 4,700 feet, received between 1 and 3 inches of snow, Daniel said.

All of this resulted in most local schools delaying their start times by two hours.

Most other people delayed their mornings as well, but some drivers decided to brave the conditions and a few ended up getting their vehicles temporarily stuck in the snow or damaged due to slide-offs.

One was a vehicle that slid off the road and down a 20-foot embankment on Geneva Drive at about 6 a.m., said Lt. Jon Brambila, a spokesman for the Prescott Police Department.

The other was a vehicle that slid off Highway 89 into some trees near the Phippen Museum at about 7:50 a.m., said Jeff Jones, a firefighter/paramedic with the Prescott Fire Department.

No one was injured in either of the accidents.

No weather-related crashes were reported in either Prescott Valley or Chino Valley.

Part of this low-incident count is thanks to the diligent work of snowplows clearing the main roads throughout the early morning hours and the moderate temperatures.

“The plows did an excellent job starting at about 1:30 am this morning and the temps stayed up so nothing froze,” Brambila said.

There were, however, six weather-related power outages in the quad-city area and Mayer on Tuesday, said Lily Quezada, a spokeswoman for Arizona Public Service (APS).

A total of about 4,700 APS customers were without power for some period of time, she said.

The earliest outage occurred in the Dewey/Humboldt area. It was first reported at 12:16 a.m. and wasn’t fully fixed until about 6 a.m.

The largest outage began in Chino Valley at about 1:45 p.m. and was estimated to be fully fixed by 7 p.m.

The only municipality that didn’t have an outage of any sort was Prescott Valley.