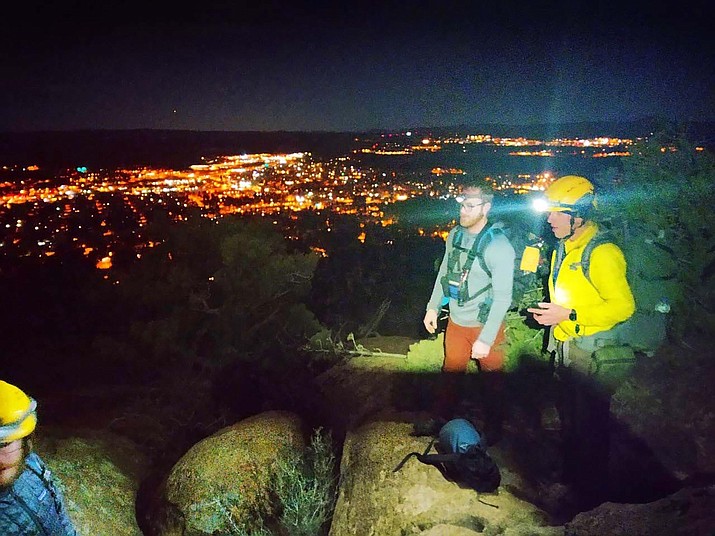 A lost hiker and his dog were located on Mount Elden after they became lost Feb. 6. (Photo/CCSO)

FLAGSTAFF, Ariz. — On Feb. 6 around 7:30 p.m. the Coconino County Sheriff’s Office Search and Rescue Unit responded to a stranded hiker off-trail on Mount Elden in Flagstaff.

The 31-year-old male hiker and his dog were stranded in the boulders on the south side of Mount Elden below Devils Chair.

A local Flagstaff resident had gone out for a hike at around 4 p.m. with his dog, intending to hike up Mount Elden starting at a Forest Service access point at the base of Mount Elden off Skyline Road and Forrest Brook trail in Flagstaff. The hiker had worked his way up to the Blue Dot Trail, through a network of social trails, which are unmarked trails. During his return down the social trails he became turned around and lost. He then contacted 911 around 7:30 p.m. and Coconino County Search and Rescue (SAR) were called out.

SAR personnel speaking by phone with the lost subject advised him to stay at his current location. GPS coordinates were obtained off the subject’s 911 call and two teams of searchers were deployed from different directions to locate the subject and his dog.

Rescuers were able to locate the man and his dog in good condition and walk them out safely at 11:34 p.m. The man and dog were uninjured and not in need of any medical attention. Both walked home safely from the same Forrest Service access point at the Skyline Road and Forrest Brook trail location.

The sheriff’s office stated they were happy for the safe outcome of this event and would like to remind anyone planning on hiking to be prepared for the weather or elements and always have the ten essentials: waterr, food, extra clothing, map and compass, GPS, headlamp, first-aid kit, shelter material/space blanket, fire starting kit/matches, pocket knife/multi-tool and whistle/signal mirror.