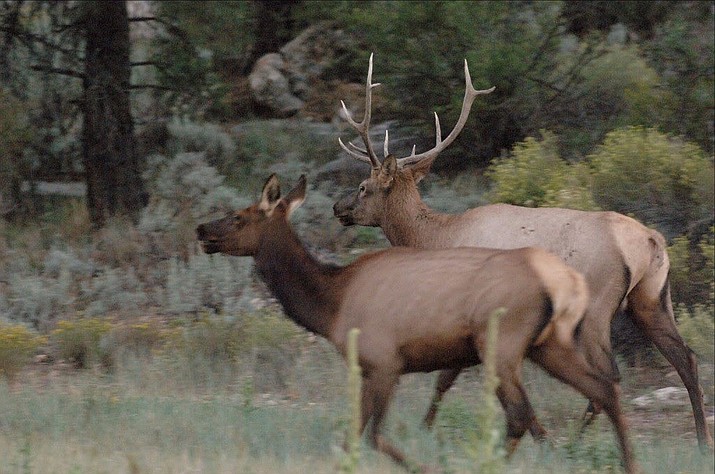 In 2018, West Virginia Division of Natural Resources transported 60 elk into the state from Arizona in order to repopulate them in West Virginia. Nearly one-third of the transplanted elk herd have died from a parasite, a wildlife official said. (West Virginia Department of Commerce)

CHARLESTON, W.Va. — Nearly one-third of the elk herd transported to West Virginia from Arizona two years ago have died from a parasite, a wildlife official said.

In 2018, West Virginia obtained 60 elk from Arizona, which included 50 cows and 10 bulls. The elk were tested and held for 30 days in Arizona.

In March 2018, the animals were transported to Logan County, West Virginia and underwent an additional 90-day quarantine period mandated by the U.S. Department of Agriculture. Just before the elk were scheduled for release as a herd, officials had to recapture them individually for a second disease test because the animals were badly stressed. Four of the cows died during that period from injury or from stress, wildlife officials said.

The elk were then set free three months before the start of mating season.

“Between the extended quarantine and the stresses of the mating season, those animals were in poor condition headed into the winter,” said Randy Kelley, elk project leader for the West Virginia Division of Natural Resources (DNR). “But then spring popped around, and that’s when they should have had the opportunity to put on a lot of weight.”

According to Kelley, the elk began feeding on the abundant West Virginia greenery but some accidentally ingested brainworms, a common parasite found in the state's white-tailed deer.

White-tailed deer carry the parasite but apparently are unaffected by the brainworms, which can be deadly to other antlered animals. Kelley told the Charleston Gazette-Mail that elk don’t get brainworms directly from the deer. During grazing, the Arizona elk accidentally consumed snails that had eaten brainworm eggs. The brainworms burrow through the elk’s brains, creating holes that cause the animal to lose control of eating and other bodily functions, Kelley said.

More snails and slugs existed than usual during the wet spring of 2019, and the infested animals ended up wasting away, Kelley said.

"If we had been able to release those elk promptly, and without having to recapture each one of them individually for re-testing, I think a lot more of them would have survived," Kelley said.

Kelley estimated the size of the state’s nascent elk herd at 85 to 95 animals just before the last spring season. After the loss of the Arizona Elk his estimate has dropped into the 75-80 range.

DNR officials are working to obtain more elk to compensate for brainworm-related losses.