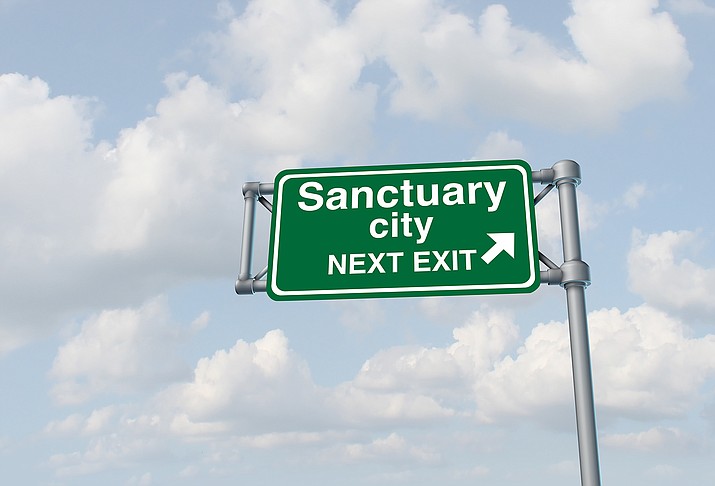 PHOENIX (AP) — It's already illegal under state law, but Republicans in the Arizona Legislature want voters enshrine to a ban on "sanctuary city" policies in the state Constitution.

The constitutional amendment introduced Wednesday by Republican Rep. T.J. Shope is backed by GOP Gov. Doug Ducey. If it passes the House and Senate it would be placed on the November ballot.

The state's high-profile 2010 immigration law known as SB 1070 already requires police officers to cooperate with immigration officials. Tucson voters rejected an effort by that city to a adopt sanctuary policy last November by a more than 2 to 1 margin. The vote came after city officials campaigned against it, saying it jeopardized public safety and could have cost millions of dollars in state and federal funding.

Still, Republicans who hold the majority in both chambers are embracing the call Ducey made last month in this state of the state address to allow voters to enact a constitutional ban. He called for lawmakers to approve the 2020 ballot referral and send it to the voters for their approval.

"If anyone needed a reminder, that here in Arizona, we respect the rule of law: last fall the voters of Tucson demonstrated that loud and clear," Ducey said in the speech. "There, in our state's second largest city, a troubling proposal to defy federal law was soundly and overwhelmingly rejected by Democrats and Republicans alike. It wasn't even close."

Shope said in a statement that the "referendum is about protecting public safety, preventing bad policy, and supporting the brave men and women of Arizona law enforcement."

Rep. Randall Friese, a Tucson Democrat and assistant minority leader, called the issue a matter of local control and said it was also redundant because of the existing prohibition.