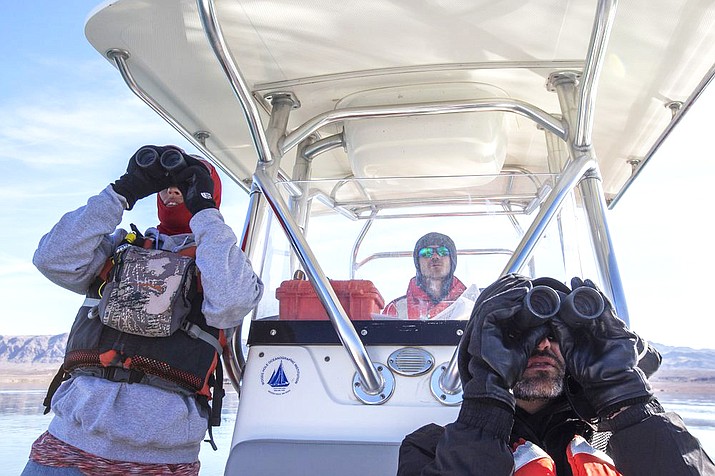 On Jan. 15, Carrie Norman, left, and Jason Lawor, right, watch for eagles and birds as Alex Swicegood drives the boat during the annual eagle survey conducted by the National Park Service at Lake Mead. (Ellen Schmidt/Las Vegas Review-Journal via AP)

Park spokeswoman Christie Vanover said Tuesday the number was down from January 2018, when spotters on boats using binoculars counted 137 bald and five golden eagles in an annual midwinter survey on the vast Lake Mead and Lake Mohave reservoirs.

No count was conducted in 2019 due to a federal government shutdown.

The survey dates to the 1990s and is part of a national effort to track the population and distribution of bald eagles across the country. Eagles are considered an indicator of the ecological health of an area, and can traditionally be spotted from late-November to March at lakes Mead and Mohave.

Bald eagles were listed as endangered in 1967, close to extinction in the lower 48 states of the U.S. The species has recovered in years since.