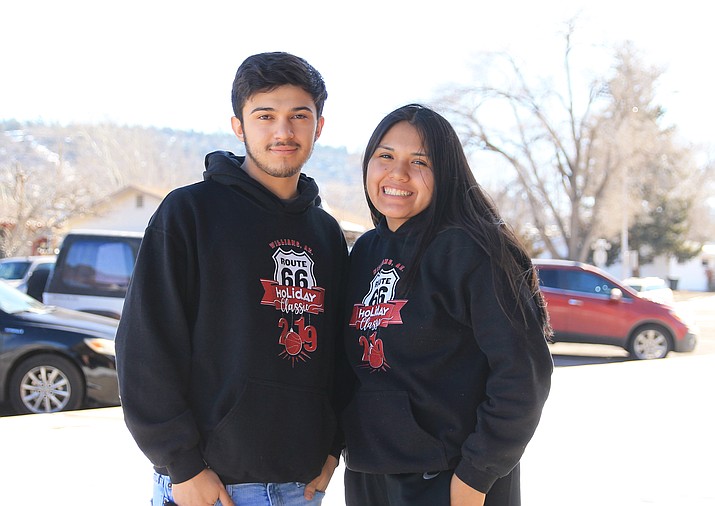 Damien Pacheo is a senior at Williams High School. He has been attending school in Williams since preschool.

Damien has been involved with National Honor Society, FFCLA, student council, volleyball and has been a volleyball manager at Williams High School and Prescott High School.

He said at the high school he has appreciated the support of Mrs. Gutshall, Ms. Kowalski, Mrs. Mongtgomery, Mrs. Moreno, Ms. Mayer and Mrs. White.

Damien said his favorite class was P.E. with Mr. Echeverria.

He said his best memory of the school is hanging out with his friends, going to Flagstaff and travelling to volleyball games.

After school, Damien has worked at Canyonlands Restaurant at Bearizona, Magic Memories and Dairy Queen. He enjoys playing volleyball and hiking in his free time.

After graduation, Damien may go to Scottsdale Community College to study business or social work.

If he took a road trip, he would take Mikayla, Brittnee, Emily, David and pretty much everyone he has known since kindergarten.

Mikayla Sanders is also a senior at Williams High School. She has been attending school in Williams since kindergarten.

Mikayla has participated in basketball, softball, volleyball and mathletes at the high school. She was also a football manager, student body vice-president and National Honor Society president.

“They made is so much fun and always pushed us to do better,” she said.

She also appreciate the support from Mr. Echeverria and Mr. Brownlee.

She said her best memory of the school is hanging out with her friends..

After school, Mikayla works at Texaco and enjoys watching movies, hiking and traveling.

After graduation, Mikayla will be attending college but is undecided. She currently has a full scholarship to the University of Arizona.

If she took a road trip she would take Damien, Jazlyn, Arden, Loren, Anna and Heaven.