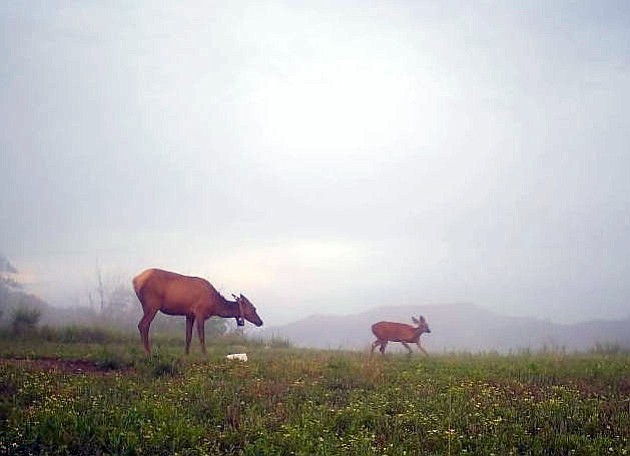 This photo, taken on a game camera on June 26, 2018, shows the first elk calf born and bred in West Virginia since elk were wiped out in West Virginia in the 1870s. Three calves were born in the Mountain State last June, but those were bred in Kentucky. (Courtesy WVDNR)

CHARLESTON, W.Va. (AP) — Nearly one-third of the elk herd transported to West Virginia two years ago have died from a parasite, a wildlife official said.

White-tailed deer carry but apparently are unaffected by brainworms, which can be deadly to other antlered animals. Randy Kelley, the West Virginia Division of Natural Resources' elk project leader, told the Charleston Gazette-Mail that during grazing, the elk accidentally consumed snails that had eaten brainworm eggs.

More snails and slugs existed than usual during the wet spring of 2019, Kelley said.

There were 46 elk transported from Arizona in March 2018 to Logan County. The elk underwent a 120-day quarantine period mandated by the U.S. Department of Agriculture which included an additional disease test.

"If we had been able to release those elk promptly, and without having to recapture each one of them individually for re-testing, I think a lot more of them would have survived," Kelley said.