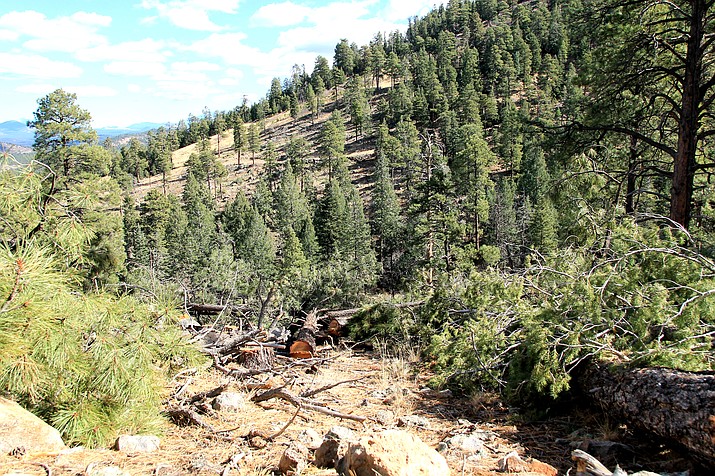 The temporary area closure restricting public access from the mountain where helicopter operations were occurring has been lifted as of Feb. 1. (Wendy Howell/WGCN)

WILLIAMS, Ariz. – Previously closed areas including all hiking trails in the Bill Williams area are now open to the public as work to thin steep slope areas on Bill Williams Mountain remains at a standstill due to winter weather conditions.

According to the U.S. Forest Service, work on the Bill Williams Mountain Restoration Project that began last October has been temporarily delayed because of above average snowfall early in the season.

The temporary area closure restricting public access from the mountain where helicopter operations were occurring has been lifted as of Feb. 1. The previously closed areas, including all hiking trails, are now open to the public. Aerial operations will cease until conditions improve.

The first 300 acres on the project have been thinned, and 100 acres of wood and slash have been successfully removed by helicopter and truck hauling methods. However the remaining material is now inaccessible due to a series of winter storms delivering several feet of snow in the higher elevations. Fluctuating daytime temperatures coupled with overnight freezing has resulted in multiple layers of heavy ice and snow covering the ground surfaces delaying operations until melt off.

More than 1,000 acres on the steep slopes of Bill Williams Mountain have been identified and prioritized for immediate treatments to reduce the risk of a hazardous wildfire that could potentially be destructive to vital watersheds above the city of Williams. Kaibab National Forest Officials are actively planning for the next phases of these important treatments that will be ongoing over the next few years.

A collaborative partnership between The National Forest Foundation, Coconino County, The Arizona Department of Forestry and Fire Management and the Kaibab National Forest was formed to implement this project that will provide better protection from high intensity fire. It will also improve long term sustainability of critical resources that are vital to the city of Williams and many more communities to the south. Active restoration efforts will continue on the lower more accessible areas of the mountain that will include timber sale contracts as well as hand thinning and piling projects.

Conditions on the mountain will be evaluated weekly to determine when it is safe to continue with aerial operations. Forest Area Closure Orders may be initiated in the future when operations resume to ensure public safety.