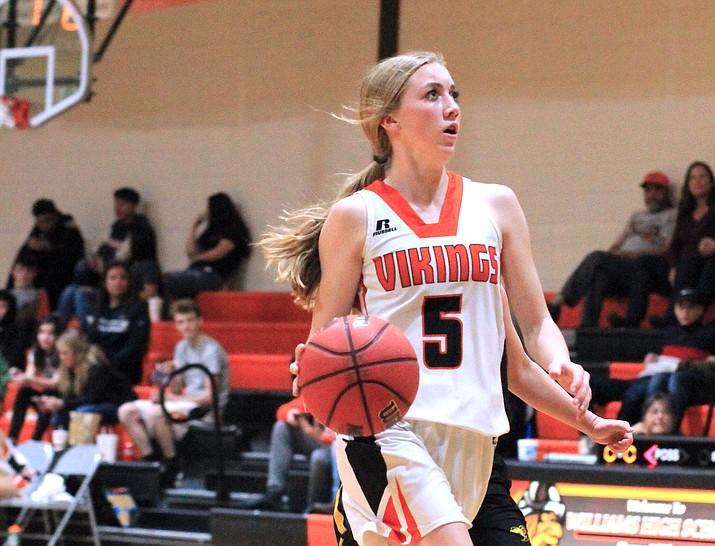 Sydney Mortensen heads to the basket in an earlier game. Mortensen scored 38 points it the Vikings win over St. Michael. (Wendy Howell/WGCN)

WILLIAMS, Ariz. — A combined effort of sharp shooting and a strong defense toppled third-ranked St. Michael Jan. 29, as the Lady Vikings cruised to a 69-48 win over the Cardinals.

Sydnee Mortensen was on fire Wednesday night as she sunk 14 field goals and went 10 for 12 at the free throw line to bring in 38 points for the Vikings.

Mortensen was helped by Maegan Ford who went 3 for 8 in field goals, 8 for 9 in free throws and sunk one 3-pointer to pile on an additional 17 points for the Vikings.

Junior Aaliyah Alvarado added another 10 points in the win.

The Lady Vikings are now ranked fifth in the state with a 19-7 record as they head into regional playoffs.

The Vikings boys varsity team also beat St. Michael Jan. 29, 79-70. The Vikings outscored the Cardinals 13-11, 20-16 and 20-14 in the first three quarters, but the Cardinals surged in the final quarter outscoring the Vikings 29-26, which wasn’t enough to take the win.

Betz was followed closely by David Lozano who scored 21 points for the team. He went 9 for 15 in field goals and made 3 of 6 free throws.

Betz had 18 rebounds and was followed by Preston Ford, who had 15 and Ceaser Santana with 14.

“We’ve had a lot of injuries and illness,” said Head Coach Troy Mortensen. “But we’re hanging in there. When we have everyone out there we are as tough as anybody.”

The Vikings returned to play Jan. 31 when they faced Basis- Flagstaff for a hard-fought win. The Vikings beat the Yetis 55-53.

Both girls and boys teams head into the regional tournament this week at home. The boys will likely play Mayer Feb. 5 at Williams High School TBA.

Mortensen said the Vikings are close to making the state playoffs, but are currently at 19th.

“At lot is still up in the air at this point though,” he said.