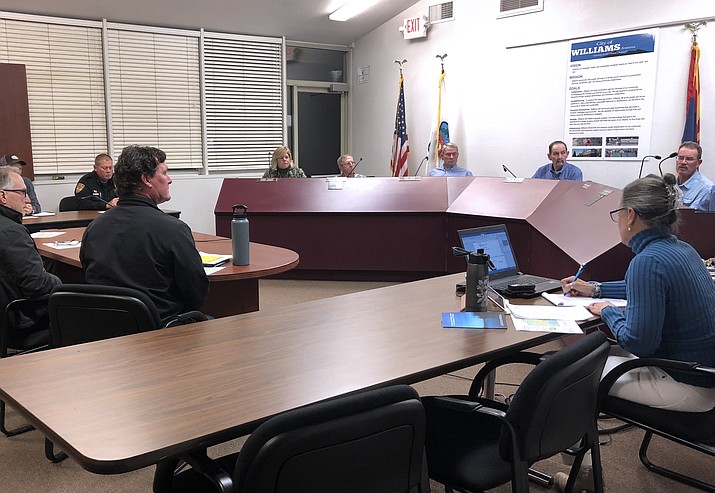 WILLIAMS, Ariz. — After reviewing several submissions for the $300,000 Community Development Block Grant (CDBG), the Williams City Council decided to submit an application for improvements to the water lines in the Homestead Road subdivision during its Jan. 23 meeting.

The Homestead Road subdivision has dealt with numerous water line breaks since the city brought the Rodeo Well back online and completed a new loop through the area.

“The problem is the age of the water line,” said Aaron Anderson with the city’s water department. “It was put in around 1959 or 1960.”

Anderson said the water department typically deals with 20 leaks per year in the older neighborhood, but said after the Rodeo Well came back online, the city water crews dealt with 59 leaks in just two months.

“Water lines like that can be affected by just a little change in water pressure, even just 5 psi,” said Michael Janes with Woodsen Engineering.

Janes, who is one of the city’s water engineers, said what happened in the Homestead neighborhood is not unusual.

“If something is constant you won’t see these problems,” he said.

The city anticipates the cost of the Homestead neighborhood water line improvements will exceed the $300,000, with the remaining coming from the city budget.

In addition to the water line upgrade, the city plans to use the opportunity to repave and provide better drainage for the road.

“These pipes are paramount,” said city councilman Lee Payne, “We have another well we want to outfit that makes no sense to outfit if we can't fix this water leak. And the road would need to be fixed because you have to tear up the road to get to the pipes.”

Several residents attended the council meeting in anticipation of the decision about the CDBG application.

Resident Gus Beatty asked whether the projects not chosen this year could be considered in next year’s budget.

Mayor John Moore said several of the projects that were submitted did not meet the guidelines for the grant, but the city would consider them in future budgets.

To qualify for the grant, at least 51 percent of the people who benefit must be low to moderate income. Some grant requests include:

2.Homestead Road water line and pavement replacement. The water lines are aging and leaking. The water line would be replaced, asphalt replaced and drainage improved. Estimated cost is $1 million.

5.New ladder truck for Williams Fire Department. Williams does not have an aerial apparatus/ladder truck for use with several multi-story hotels and commercial buildings. Estimated cost is $650,000.

6.Street improvements and water sewer upgrades near public housing units near Sixth Street and Sheridan Avenue. The alley is the only access for some residents and is in disrepair and not ADA accessible. Estimated cost is $50,000 to $100,000.

Council approved $16,762 to purchase a Toro 3040 Sand Pro groomer for Williams’ athletic fields and bunkers at the golf course. The equipment will improve the playing surface of the fields by mixing finer materials with coarser material when grooming infields. The machine can also use attachments that will cut sod evenly along edges.

The council also approved $43,000 to replace the Sanitation Department’s backhoe. The new backhoe will be added to the fleet used by the water department, street department and sanitation department. The Sanitation Department uses its backhoe for compaction of the exterior roll offs and maintaining the yard and snow removal. In addition to the $43,000, approximately $54,000 will need to come from the Water Department budget to purchase the $97,683 John Deere 310L backhoe.