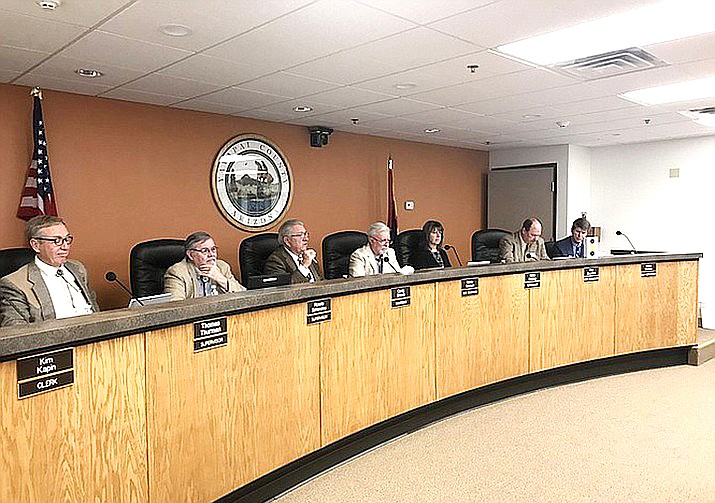 The Yavapai County Board of Supervisors will meet on Feb. 5 and is expected to vote on a resolution that would declare Yavapai County a Second Amendment Sanctuary County. (Prescott Daily Courier, file)

YAVAPAI COUNTY, Ariz. — The Yavapai County Board of Supervisors is expected to vote today on a resolution that would declare Yavapai County a Second Amendment Sanctuary County.

The possible vote comes after two previous public meetings during which dozens of people weighed in on the declaration.

The Yavapai County discussion on the matter started at a regular board meeting in Cottonwood on Dec. 18, 2019.

That meeting included nearly 40 minutes of discussion, which included comments from the public, in support and opposition to identifying Yavapai County as a Sanctuary County.

The matter went back to the board for further discussion during the board’s Prescott meeting on Jan. 2.

With an estimated 500 people in attendance, Board Chairman Craig Brown opened the meeting to public comment. More than 90 people requested the opportunity to speak in support of or against the Second Amendment proclamation, which was scheduled to be voted on by the board.

After nearly three-and-a-half hours of public comment, board members agreed to table the matter to give them “time to consider the opinions expressed and produce something that reflected the public comments regarding the proclamation,” stated the news release.

This week, Brown said, “We listened to and understand the concerns of the public, both for and against this issue, and I believe that this resolution will address most of those concerns.”

He added, “It is my hope and belief that this board will come together and support this resolution when we vote on it Wednesday.”

The Feb. 5 board meeting will take place at the Yavapai County Administration Building, 1015 Fair St., Prescott, and it will be live-streamed to the Cottonwood Board of Supervisors meeting room at 10 S. 6th St., Cottonwood.

Those wishing to view the meeting remotely can do so online at: www.yavapai.us/meetings/video-list. Video is only supported in the Edge browser and on mobile devices.

Mohave County’s Resolution can be found online at: https://lfportal.mohavecounty.us/bos/0/doc/1557984/Page1.aspx