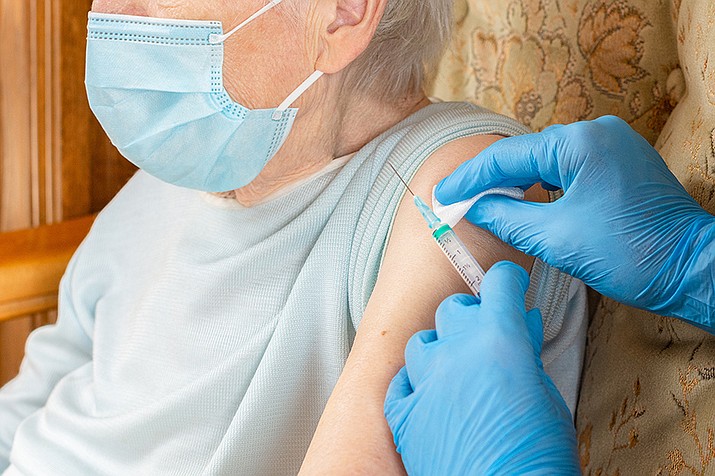 PHOENIX (AP) — Arizona has decided to include people aged 75 and older — over 534,000 residents — in the second phase of distribution of vaccinations against COVID-19, state officials announced Dec. 29.

People 75 or older are more likely to experience severe COVID-19 complications and be hospitalized and the decision Monday by a state committee of experts to prioritize those people is aligned with updated recommendations from the federal Centers for Disease Control and Prevention, Gov. Doug Ducey and the state Department of Health Services said in a separate statements.

In other developments, Arizona on Tuesday reported 2,799 additional known COVID-19 cases and a near-record 171 deaths, of which 148 were a result of a series of periodic reviews of past death certificates. Arizona's totals since the pandemic began rose to 507,222 cases and 8,640 deaths.

The prioritization of people 75 and older means those people most at risk will get vaccinated sooner, both protecting them and "relieving the strain on our hardworking health care professionals," Ducey said in the statement.

The first phase of groups prioritized for vaccinations include front-line health care providers, emergency medical service workers and residents and staff of long-term care facilities. Vaccinations of those groups is underway.

Along with people 75 and older, groups to be prioritized in the second phase include teachers, child care providers, law enforcement personnel and corrections workers.

The state anticipates that second-phase vaccinations will begin statewide by late January but some counties may begin earlier, the statement said.

The prioritization of people 75 and older elevated that group out of larger group of adults ages 65 and older. The younger people in the larger group remain in following vaccination phases along with multiple categories of essential workers and people with underlying medical conditions.

Prioritizing people 75 and older was a "meaningful" decision based on evidence, said Will Humble, Arizona Public Health Association director and a former state health services director.

For most people, the new coronavirus causes mild or moderate symptoms, such as fever and cough that clear up in two to three weeks. For some, especially older adults and people with existing health problems, it can cause more severe illness, including pneumonia and death. The vast majority of people recover.

The state's seven-day rolling average of COVID-19 deaths has increased over the past two weeks from 58.3 on Dec. 14 to 71 on on Monday while the rolling average of daily new cases dropped from 7,772 to 6,154, according to data from Johns Hopkins University and The COVID Tracking Project.

The number of infections is thought to be far higher than reported because many people have not been tested, and studies suggest people can be infected with the virus without feeling sick.

The state's coronavirus dashboard reported that 4,475 people were hospitalized for COVID-19 as of Monday, the latest in a strong of pandemic-records reported since early December. COVID-19 hospitalizations during the summer surge peaked at 3,517 on July 30.

COVID-19 patients occupied 53% of all inpatient beds and 59% of intensive care beds.