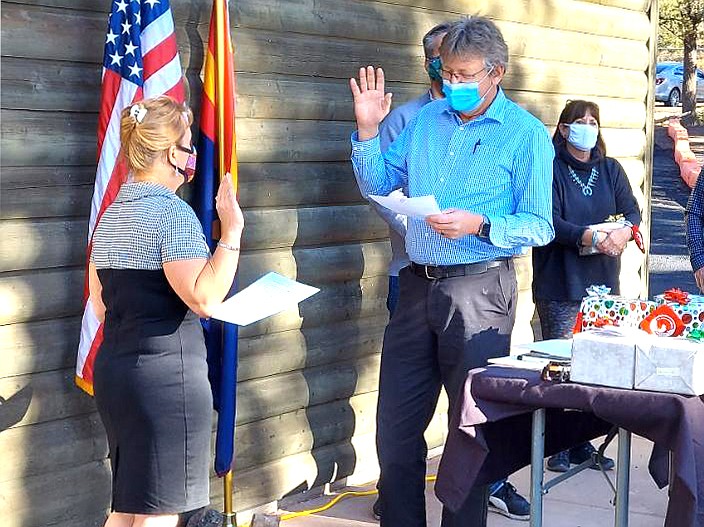 On Dec. 9, lifelong resident and property manager Clarinda Vail was sworn in as mayor of Tusayan. She will serve a two-year term.

With 61 percent of the vote, Vail defeated incumbent Mayor Craig Sanderson, who served two terms as the second mayor of Tusayan since its incorporation in 2010.

Following tradition, Sanderson passed the gavel to Vail during the Dec. 9 town hall regular meeting, offering complements to Vail for her dedication to the town, despite a history of opposition between the two on matters relating to development.

“Nobody has more of a heart for the community than Clarinda,” Sanderson said. He then addressed Vail personally, stating “When you look back over the history, and all the service and organizations that you have been a part of, there have been countless times you have shown that you really care about the community”.

Vail’s ties to Tusayan date back to the 1930s, when Vail’s grandfather, R.P. Thurston, became one of the first settlers to the area, eventually building Tusayan’s first hotel, Red Feather Lodge, in the 1960s.

During her acceptance speech, Vail stressed the importance of community participation and encouraged involvement in council meetings, which are open to the public and scheduled twice monthly beginning in January 2021.

“There are a lot of goals and a lot of different things I’d like to see accomplished for the council. We can’t do that without group opinion. We need that group opinion to make decisions as a community”, Vail said.

Vail’s campaign platform similarly discussed unity on behalf of community organizations to achieve goals such as completing the community sports complex, of which progress has been stalled for years.

Vail also promised to work toward an annual payment system to benefit residents who have lived in Tusayan for a year or more. The plan would utilize excess revenue generated by Tusayan’s tourism industry to provide residents with an initial payment of $6,000, then $3,000 per year after that.

Vail has received some scrutiny over the legality of the plan, however, she has said the plan is not only “legally sound, but the right thing to do.” 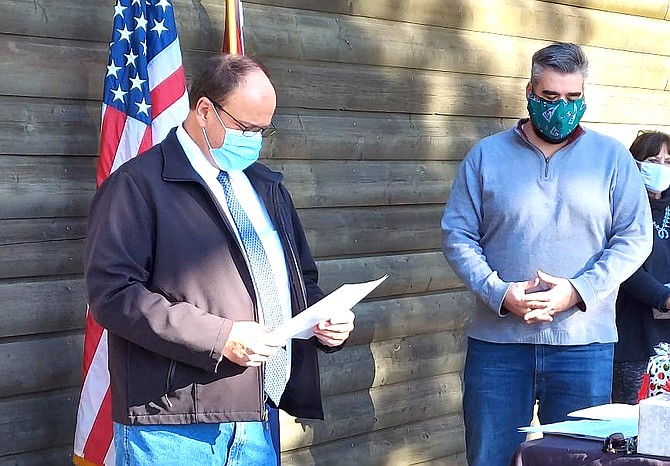 Tusayan Fire Chief Greg Brush is sworn into office as the newest member of the Tusayan council Dec. 9. (Photo/Town of Tusayan)

During the Dec. 9 town hall meeting, Tusayan Fire District (TFD) Chief Greg Brush was sworn in to take his seat on the Tusayan Town Council. He will serve a four-year term.

Brush has been a resident of Tusayan and affiliate of TFD since 2003, when he began as a volunteer firefighter.

Brush’s enthusiasm for living in Tusayan was apparent during his acceptance speech, when he expressed gratitude for the sense of community.

“I always feel that this town is very unique, I try to explain that to people. Every time we go through a crisis, I see people here helping out people, more than any other community I’ve ever seen. That’s why I love living here,” Brush said.

After serving on the Tusayan Town Council for over a decade, Councilman Al Montoya decided to step down from the council because of personal reasons.

During the Dec. 9 town hall meeting, Montoya, who has been a resident of the Grand Canyon/Tusayan community since 1995, recalled the early days of the council.

“We started this over 12 years ago, with a small band of individuals that were brave enough to put their foot into the water and see what it was going to be like, just diving into it, and moving forward, and we’ve all benefitted (sic) from it,” Montoya said.

Montoya was first appointed to council in 2010, then in 2012 was elected as Vice Mayor and served in that position for two years. After that, he was re-elected to council, and has served since then.

Montoya has also worked in the Tusayan community with Papillon Helicopters for 18 years as the company’s photo lab manager. He is originally from New Mexico.

Montoya said he plans to continue to be an active member of the community.

More information about the town hall meetings schedule is available at tusayan-az.gov/agendas-minutes or (928) 638-9909.