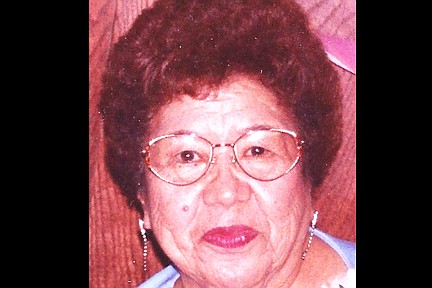 Ursula (Candy) Garcia (born Ursula Figueroa), a lifelong resident of Williams, passed away peacefully at her home Nov. 20, after a short term illness.

The youngest daughter of Mexican immigrant parents, Bardomiano Figueroa and Aurelia Gonzalez, Ursula was born in Williams in 1923.

She had five older sisters and brothers - Antonia, Remedios, Maria, Jesus and Eugenio - as well as a younger brother, Alvino, but was the last living of her siblings. She is survived by 25 nieces and nephews, their children and grandchildren and also her partner Epitacio Ruiz.

As well as having a large extended family across Northern Arizona and the Phoenix area, Candy’s nieces and nephews and their children are located in California, Nevada, Utah, Colorado, New Mexico and even in Sweden.

Born in Williams, Ursula’s family quickly became part of the Williams community. Ursula was the only one of the family who lived her entire life in Williams. She married World War II veteran Jesus Garcia in 1947 and they lived many years at their house on 3rd Street until his untimely death in 1972.

Ursula was well known to the community for working in local general stores, such as Babbitts, (where she became known as Candy, a nickname that stuck for the remainder of her life) and being very active in St. Joseph’s Catholic Church. Apart from being an active member in St. Joseph’s, she was involved with Las Guadelupanas and the Society of the Little Flower of St. Therese. At various times during her life she was also active with the local American Legion and the Senior Citizens Club as well as other local organizations.

She always looked sharp, dressing well and keeping her appearance tidy to her last days. We all have our private memories of Candy’s compassion, love and friendship and all will remember her smile, her dimples and her easy and pleasant demeanor.

There will be a private family service at St. Joseph’s on Friday, Dece. 4 at 11 a.m., followed by a public graveside service at the Williams Cemetery. Pallbearers for the casket will be Jimmy Figueroa, Isaiah Figueroa, Richard Garcia, Ramiro Ruiz, Diego Pedroza and Richard Acosta. Honorary Pallbearers are Raymond Acosta, Alfred Acosta, Nick Figueroa, Frank Rodriguez, Paul Rodriguez and David Figueroa. The private service is planned to be live streamed for anyone wanting to take part. Please refer to the St. Joseph’s Facebook page at @SSJAF Community - further details for streaming St. Joseph’s services can be found at https://ssjaf.weconnect.com/live-stream-mass--english-and-spanish-.

Anyone wishing to honor Candy’s life with a gift can make a donation to St. Joseph the Worker Church in Williams, Arizona in her name.