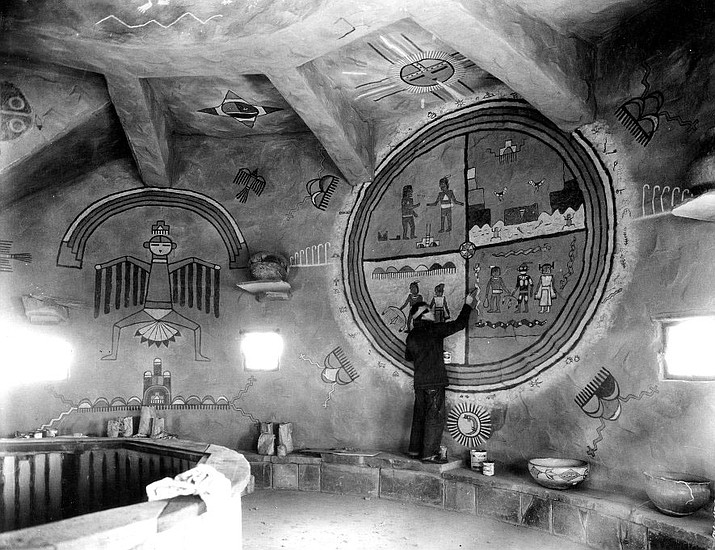 Hopi artist Fred Kabotie stands on a stone bench and colors in figures within a painted circle mural at the Desert View Watchtower circa 1930. (Photo/NPS) 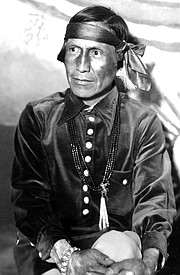 According to NPS, Kabotie was born circa 1900, to a traditional Hopi family. He was sent away to the Santa Fe Indian School where he drew images of Kachinas to ease his homesickness. After graduation, Kabotie was hired as an illustrator and commissioned to paint for private collectors.

In 1920, Kabotie was one of the first Hopi artists to gain national recognition when an exhibit of his work was shown in New York City.

In the 1930s, Kabotie was hired by Mary Jane Colter to paint the murals in the Desert View Watchtower at Grand Canyon National Park.

According to the Native American Art website, Kabotie’s 1941 reconstruction of a prehistoric Awatovi mural was shown at the Museum of Modern Art.

In 1945, Kabotie received a Guggenheim fellowship to study prehistoric Mimbres pottery, and in 1954, he was awarded the French government’s Palmes d’Académique for his contribution to Native American art.

Kabotie encouraged and taught younger Native artists throughout his career, and worked to preserve traditional Hopi art through the founding of the Hopi Silvercraft Cooperative Guild and the Hopi Cultural Center, on Second Mesa, Arizona.