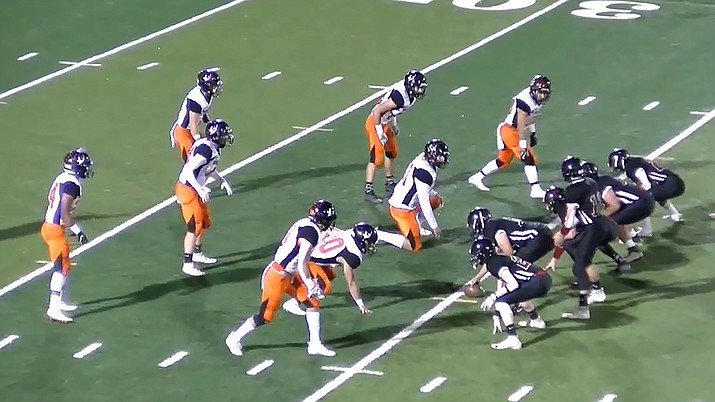 The Vikings returned to the 1A State Championship game in Scottsdale Nov. 28 to face Mogollon. The Vikings lost 38-30. (NFHS network image)

WILLIAMS, Ariz. — The Williams Vikings capped off a unique season as runner-ups in the 1A State Championships Nov. 28.

The Vikings faced top seed Mogollon in Scottsdale in a close and competitive game, keeping pace with the defensive powerhouse.

The second-seeded Vikings came ready to fight after losing a lop-sided earlier season game with the Mustangs on the Viking’s home turf.

The team was confident, with a strong passing game, but the effort came a little too late as the Mustangs maintained their momentum throughout the game.

“We did not take care of the opportunities we had in the first half,” said Vikings Head Coach Jeff Brownlee. “Mogollon is a very good football team, unfortunately we were unable to stop them toward the end of the game.” 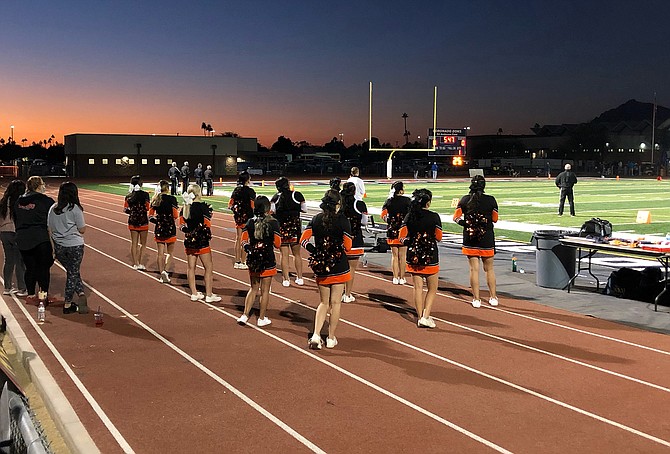 The Vikings cheerleaders rally the crowd at the state tournament. (Photo/Darcie Jensen)

Fans at the field and watching from home thought they were set for a repeat blow-out by the Mustangs when the team ran up an 18-0 lead in the first half.

“We kept making our own mistakes, whether it was a mental mistake, or blocking or catching a pitch,” Brownlee said. “But the kids got together and said ‘We are better than this,’ and they responded very well.”

The Vikings finally found their pace when Viking Blake Smith scored on a short run and Preston Ford followed with extra points to bring the score 18-8 before half time.

After the half, the Mustangs quickly responded to bring the score 26-8, however, the Vikings capitalized on opportunities and pulled in two quick touchdowns, by Ford and Drew Logan, to bring the score to 26-24. Luis Lara and Zain Grantham got the extra points.

“They started stepping up, the kids started believing in themselves and started playing good football,” Brownlee said.

Mogollon and Williams continued the back-and-forth as the Mustangs scored, to pull the score 32-24. The Vikings responded with a Grantham touchdown to move the score 32-30.

The Mustangs continued strong play as the clock began winding down in the fourth and scored one more touchdown to make it 38-30.

The Vikings had plenty of time for a final push, but were beset with penalties as two pass plays were called back on Logan and Lara. The Vikings eventually turned the ball back to the Mustangs who got the win, 38-30.

“We had a couple long passes that were caught, but with the penalties they all came back,” Brownlee said. “It’s disappointing, but that is how the game is played sometimes.”

The win is the first title for the Mustangs since 2014.

“This was a very hard fought contest for sure,” Brownlee said.

For those who followed high school sports this year or anyone playing it knew the strangeness facing the season.

Forfeits loomed throughout all fall sports, and Williams took one game from Mayer when they were forced to cancel because of concerns of coronavirus.

As he reflected on the season, Brownlee said the year was difficult for the team.

“It’s been tough on these kids,” he said. “They have been practicing since June. We throw the ball here, the passing league is cancelled, we lift weights, football gets pushed back. It has been hard to keep the kids mentally and physically prepared. It was a long process until we finally played, and in that aspect we’re happy we even go to play football.”

Grantham completed seven of 11 passing attempts for 66 yards. He also carried the ball 14 times for 90 yards and one touchdown.

“Zain Grantham played his heart out all year long,” Brownlee said. “It was a lot of fun playing football with that kid this year.”

Senior Blake Smith carried the ball eight times for 77 yards and one touchdown.

“We lose a quality running back with Blake Smith,” Brownlee said regarding the players he will lose to graduation.

Despite the loss, Brownlee said he is encouraged by the quality play by the teams the Vikings faced this year.

“We like to play tough teams, that gets us in better shape,” he said. “We want a competitive league, that’s what all the coaches strive for. Blowouts aren’t any fun.”

Brownlee said the team loses a strong group of senior athletes this year. They include most of the offensive line - Cesaer Santana, James Eischen, Cody Jensen, Cody Clark and Luis Lara.

“We’re going to lose some really good kids, but next year we hope to be right back in the thick of it,” he said.